The New National Gallery of Canada 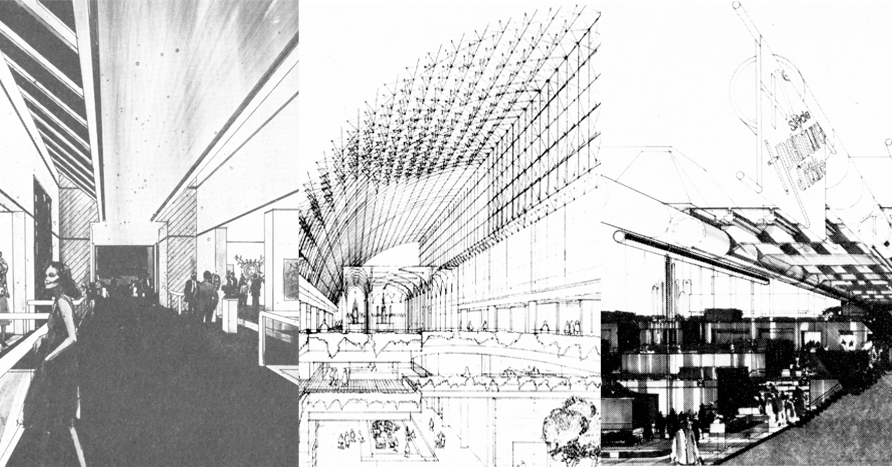 The basic organizational concept for Wellington Street West provides for a linear communication system linking Parliament Hill to Hull via the Portage Bridge. The new National Gallery site and building complex must complement this general objective, as well as providing easy access to the vistas associated with the Ottawa River.

Development of the new National Gallery, in conjunction with the parliament buildings, the judicial buildings and the cultural buildings, must complement the general planning objectives for the Wellington Street West sector, as stated in section.

There are two predominant sets of users in the Wellington Street West sector: (1) public servants and (2) visitors to the area. Significant numbers of these visitors will arrive by chartered bus on tours. In addition, it is anticipated that the new National Gallery, the National Library and the recreation activities proposed for Richmann Lanrling and Victoria Island will form a network of visitor attractions within the planning sector that must be accessible to all pedestrians, including the physically and handicapped.

Visitor amenity areas for resting, viewing and obtaining information are noticeably lacking in the planning sector, and future projects should provide appropriate areas for these amenities, wherever possible.

The functional activities of the Wellington Street West sector are organized into three distinct precincts: the parliamentary precinct, the judicial precinct and the cultural precinct. Development of the new National Gallery complex must complement the following functional objectives for these precincts:

a) To develop a coherent circulation system linking the three precincts and the entire planning sector to the governmental, commercial, residential and cultural facilities in the core area of the National Capital.

b) To encourage year-round public use of the sector without diminishing its symbolic importance;

d) To ensure that the sector is organized and serviced efficiently and economically.

Board of Assessors' Report
The Board of Assessors wishes to express its awareness of the honour and responsibility inherent in its appointment to assess the submissions presented by ten teams of competitors for the limited architectural competition for the new National Gallery of Canada. We express our thanks to Public Works Canada, and especially to Mr. Guy Desbarats its Assistant Deputy Minister, as well as to the staff of the National Gallery of Canada, for the facilities and help with which they have eased our task.
All submissions presented to our review preserved the condition of anonymity, being identified only by a letter and number designation. The program for the competition, as prepared by Philip Bobrow and Associates Ltd. for Public Works Canada as documentation for the competitors, had been available to members of the Board of Assessors for several months before its meeting. Public Works Canada had assessed the submissions on purely objective points, with several technical committees for such criteria as fulfilment of mandatory requirements for the handicapped, users' and functional needs, performance and specifications. Reports of these committees were, however, not considered by the Board of Assessors until the last phase of its deliberation. We are grateful to member of the National Capital Commission and staff of the National Gallery of Canada who have contributed to the technical committees.

Preamble
In exercising its mandate the Board of Assessors followed certain general criteria that it considers fundamental to the project.
1. The National Gallery of Canada serves as the repository and custodian of those manifestations of man's creativity that form the nation's cultural heritage and demonstrate Canada's place in the history of civilisation. As such its physical container must express a presence that honours and dignifies its functions.
2. The National Gallery of Canada will be sited in the heart of the National Capital, extending the link between legislature, judicial and cultural functions of government as expressed physically in Parliament Hill, the Supreme Court complex and itself. It must respect the urban complex developing on Wellington Street West, as well as the typical Canadian landscape of the Ottawa River and its stony escarpments.
3. The National Gallery of Canada is a meeting-place for people and art. This can be achieved only in an environment which will meet a certain number of requirements. The working functions of the institutions are specified in the program. In addition, its architectural design must welcome the visitor with a clear demonstration of accessibility and comprehensibility. Its form, structure and relationship of parts must help the visitor to become receptive of and familiar with art.
4. The National Gallery of Canada will be constructed with public funds; its costs must, therefore, be controllable and efficiently deployed.

Assessment
The Board of Assessors has decided that submission by Parkin Architects and Planners is the best conceptual design among the ten competitors.
After review of all ten submissions the Board of Assessors determined that only one of two possible routes to judgment was possible. Selection of the design with the least number of faults could not lead to an acceptable design. On the other hand, selection of the one with a major virtue presents a potential for a distinguished, effective and sound structure.
The winning entry distinguishes itself from the other competitors by its sense of order. Three components play an important role in its effect - measured proportions, structural clarity, and its diagonal location on the site. The structure's symbolic value is identifiable. At the same time its relationship of external form with internal space could be exciting. Its sense of order is an interesting beginning to an integrated solution, and should allow the flexibility required to created both "universal space" or spanfree expanses for areas of public congregation and/or special exhibitions, as well as the controlled or disciplined spaces required for activities and permanent collections. The winning scheme suggests a classic solution to architectural "delight" - subtle, unassertive and rational.

Critique
Urban Design Factor - based on two elements; the axial links between the National Gallery of Canada and the Mackenzie Tower, and the Ottawa business core, and beyond the urban surround.
The winning entry conceives of these links as forming a polarity between their termini. Its diagonal placement should suffice to create a focal interest to those approaching on either axis. The glass screen in unnecessary and distracting. It should be discarded, and the façade restudied with consideration for interpenetration of spaces. The main entrance should also be reconsidered as to its angular juxtaposition on the axis. The entry does not attempt to harmonize with other structures adjacent to it. Still, its proposed surface cladding of limestone accords well with the National Archives' granite cladding. In the formal sense the scheme is not a good neighbour. However, the Board of Assessors has given serious thought as to whether the immediate urban environment merits an attempt to adjust to it in design, e.g. with the National Archives. Its judgment that the new National Gallery of Canada could create a new standard of architectural design for the area implies that future development of the Wellington Street West locale should be re-energised. Nevertheless, thought should be given to opening views from the National Archives
The Board of Assessors strongly recommends that, until such times as the Federal Court building is constructed, its site be suitably landscaped. This may be considered an interim solution to correct what might otherwise be seen as an urban wasteland for an indeterminate period of time. Site Development - based on the following elements (a) natural terrain (b) the river frontage, and (c) access and circulation.
(a) The winning scheme presents possibilities for the stepping down of its modules or system units to the river; analogy to an Italian hill village presents itself to the art historical imagination. At the same time, the building could include open and closed spaces with different elevations, offering three-dimensional variety when seen from above or below.
(b) The scheme is not satisfactory in its treatments of the river frontage, but is not incorrectible in this aspect. Thought should be given to the transition between the architectural structure and the river promenade. However, the entry has diagonal views outward, up and down the river, which are potentially the best offered. In addition, its facade seen from the river would offer a dynamic extension of the rugged escarpment forming the base of the Supreme Court.
(c) The winning scheme has not solved the circulation patterns on the site; i.e. entrance for tour groups including bus-staging area, servicing of the Cliff Street Plant and the gallery itself, and access to the river promenade.
The Boards of Accessors recommends that carful attention be paid to land-scaping in terms of natural configurations, as well as the selection of plantings.
Design - based on the interior, as the ordering system would be reflected on the exterior.
The winning entry lends itself to a flexible ordering of structure, space and light. At the moment its reception areas are inadequate in space and, therefore, do not suggest the open-mindedness together with indirect signals for orientation that are required for the gallery's presentation to the public. Moreover, its present design does not go beyond a "measure-system". The designer should use tis means to create a dialogue between measurements, supports, circulation routes, roof constructions and contrasting spaces. While the ordering system of the scheme could lead to understandable and comfortable spaces, as well as exciting ones, its present rigidity is disturbing to the Board of Assessors. The wells between modules serving only for "circulation bridges" are unnecessary for the gallery lighting purpose and useless for activity.
Integrated Systems - based on program requirements.
The entry generally presents the best thought-out systems among the ten submissions. A number of technical problems remain to be solved - fire-control including exits from stairways, circulation including elevators for visitors, freight (most especially on the sky lighted roofs), and snow removal in other areas.
The Board of Assessors desires to emphasize that a final design will emerge only in succeeding phases of this project. The essential catalyst for a successful development of the design lies in the future relationship between the architectural team and the gallery's users.
The winning project team included: structural engineers, Parkin Engineers Ltd., with Robert Halsall & Assoc. Ltd; mechanical engineers, H.H. Angus & Assoc. Ltd; electrical engineers, Jack Chisvin & Assoc. Ltd; estimating and cost control, Hanscomb Roy Assoc; lighting consultants, E.C.E. Group; landscape architects, Jonhson Sustronk Weinstein & Associ. Ltd; and acoustics consultants, Valcoustics Canada Ltd. Project leader is John C. Parkin, senior partner.

(From competition's documentation)
Press Review
The Canadian Architect, 1977
List of general documents
(not accessible)
IMPORTANT NOTICE : Unless otherwise indicated, photographs of buildings and projects are from professional or institutional archives. All reproduction is prohibited unless authorized by the architects, designers, office managers, consortiums or archives centers concerned. The researchers of the Canada Research Chair in Architecture, Competitions and Mediations of Excellence are not held responsible for any omissions or inaccuracies, but appreciate all comments and pertinent information that will permit necessary modifications during future updates.
info@ccc.umontreal.ca
Production