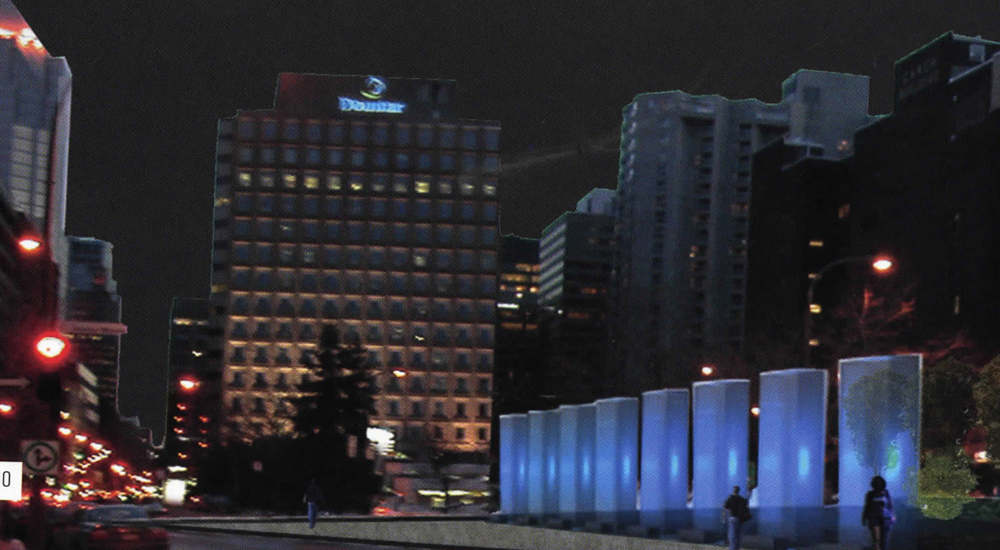 GENERAL INFORMATION ON THE COMPETITION
Description
On February 25, 2003, Montreal City Council approved a memorandum of understanding with the Université de Montreal and McGill University. Involving the École d'architecture, the Institut d'urbanisme and the École d'architecture de paysage at the Université de Montreal's Faculté de l'amenagement, and the Schools of Architecture and Urban Planning at McGill University's Faculty of Engineering, the agreement provides a framework for a series of training- and research-related projects with a focus on heightened awareness of urban design and original, high-quality urban solutions.
The first of the six projects covered by this agreement consisted in a competition open to students in architecture and landscape architecture at both universities, aimed at transforming a downtown parking lot into a very high-quality public space. The project site is Place Eugene-Lapierre, located at the corner of Boulevard de Maisonneuve and Rue Jeanne-Mance. Executive Committee member Robert Libman, who is in charge of land-use planning, urban planning and architecture at the City of Montreal, has indicated that "the City intends to realize the winning project."

The public area of a metropolis consists of all open and, in some cases, covered spaces dedicated to use by citizens for transportation (including foot traffic), as well as strolls and other leisure activities. A city's entire built environment is located in relation to and in order to be accessible via this public area. The quality of buildings contributes greatly to the quality of public spaces.
In the traditional city, these spaces are often typical shapes that have been defined by history, the growth of the city and the successive planning by-laws. Streets, boulevards, avenues, alleys, squares, gardens and parks are some of the main types of traditional public spaces created over the centuries. The modern period has introduced new spatial concepts such as raised pedestrian platforms, underground passageways and atriums.
Unfortunately, we have also witnessed the destruction of pleasant public spaces and natural features: squares have been replaced by freeways, traffic circles, cloverleaf crossings and parking lots. In recent years, however, public spaces have been the focus of renewed attention and calls for design solutions compatible with contemporary urban culture.
The Place Eugene-Lapierre design competition was aimed at promoting the emergence of new visions, new ways of doing things, with infrastructure supporting original, significant design proposals that reconcile citizens with their city's public spaces. Interpreted as urban spaces and living spaces, public spaces require imagination and the association of materials from the tangible and artificial environments, in pleasant compositions conveying all of the real and virtual facets of contemporary creation. The Eugene-Lapierre design competition should be seen as a pilot project for future initiatives by the City aimed at transforming parking lots into welcoming public spaces.

Jury comments
The jury met on Thursday, April 10, 2003, at the School of Architecture at McGill University. Twelve projects were submitted.

The members of the jury were particularly impressed by the overall quality of the projects and documents submitted. They wish to thank all of the competitors for their serious commitment to this adventure. The students showed that this type of competition can constitute a valuable contribution to the debate on public spaces in Montréal, and the jury hopes that this was only the first in a long series of design competitions.

Three projects were short-listed by the jury after three hours of evaluation and discussion. The members saw them as the most complete in terms of in-depth thought about the public space targeted by the competition, as well as feasibility and daring. As you will see, all three projects incorporate differences in perceptions and views between day and night, summer and winter - basic characteristics of a Montréal public square.


(From the jury comments)
List of Competitors
Competition staff and jury
Calendar
The design competition was held from Thursday, March 13, to Monday, March 17, 2003, in the form of a charrette. The participants were divided up into teams of three to four persons each. As far as possible, each team included at least one landscape architecture student, an architecture student from the Université de Montréal and an architecture student from McGill University. The make-up of the teams was decided in collaboration with representatives of the three participating schools. The charrette was held on premises of the three schools. At each school, a professor supervised the overall activities. Most of the student participants did not know each other or had never worked together prior to the charrette.
Press Review
Université de Montréal. Faculté d'aménagement,, Place Eugène-Lapierre, 2004, Montréal
Ville de Montréal, Annonce des gangnants, remise des prix et lancement de l'exposition du concours d'aménagement de la place Eugène-Lapierre, 2003
Madeleine Leblanc, Urbanisme-Repenser la ville, Le devoier - libre de penser, 2003
List of general documents
(not accessible)
IMPORTANT NOTICE : Unless otherwise indicated, photographs of buildings and projects are from professional or institutional archives. All reproduction is prohibited unless authorized by the architects, designers, office managers, consortiums or archives centers concerned. The researchers of the Canada Research Chair in Architecture, Competitions and Mediations of Excellence are not held responsible for any omissions or inaccuracies, but appreciate all comments and pertinent information that will permit necessary modifications during future updates.
info@ccc.umontreal.ca
Production