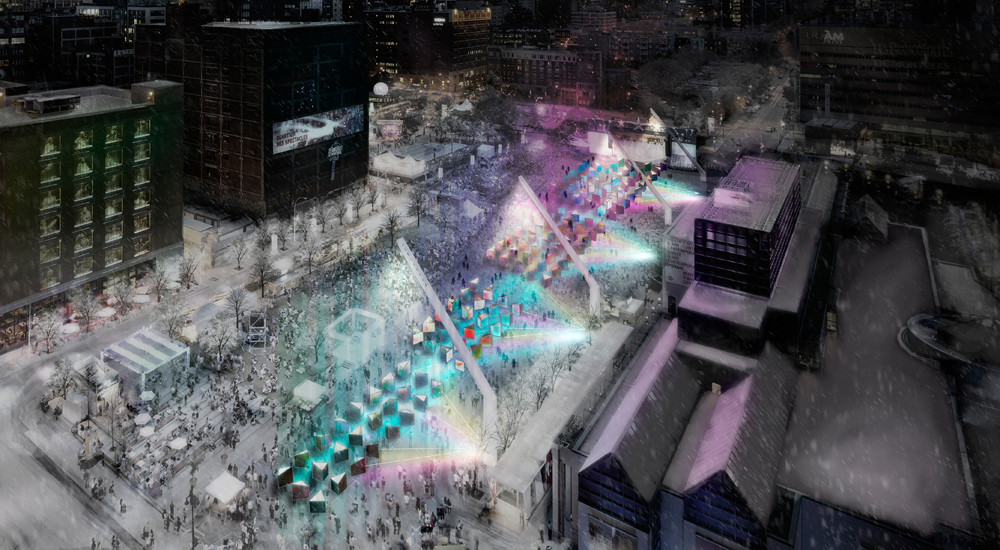 GENERAL INFORMATION ON THE COMPETITION
Editorial
Healing Through Interaction?
by Noémie Robitaille & Newt De Nijs, published 2017-04-03
The “Luminothérapie” series are some of the most important competitions with regards to ephemeral installations in Quebec, hence, we present the 2015 edition. The call for proposals was launched by the Quartier des spectacles partnership and encourages interactive and immersive projects every year. These are a result of collaborations between different disciplinary fields, such as design, entertainment and digital arts. In addition to being an opportunity for Canadians to explore and create, this initiative allows visitors to enjoy the public space even in the winter. As is implied in the title, luminothérapie the competitions seeks for a solution for the lack of sunlight and to counteract winter depression.

During the fifth edition, which took place during the winter of 2014-2015, the competition aimed to reward a project that would animate a public place both day and night. The competition took place in two phases: the first evaluated the quality of the concept, while the second phase focused on the feasibility and refinement of the concept. The project had to imagine a luminous space that provides the user with security, comfort and social exchanges, in addition to respecting the specificity of its context. Competitors also had to demonstrate an environmentally sensitive approach, taking into account the technical and technological feasibility of the installations. Finally, the project had to meet a maximum budget of $ 225,000.

The jury for this competition, distinct to each phase, consisted mainly of members of the Quartier des spectacles partnership, as well as several producers of digital arts and architects. Of the 45 participating teams, four finalists were selected for the second stage of the project. These were selected for pushing the theme of interaction, an essential criterion for this competition.

The team La Camaraderie favored the participation and experience of the user, emphasizing interactions with the installation. This project, an outside shadow theatre, consisted of a succession of translucent screens. The theatrical character of the Quartier des spectacles is embodied by a simple interaction between the performance and the visitor, for which the latter becomes the actor and the creator. Visitors were offered the freedom to express themselves in the public square, thus growing a fondness for theatre and performances. The jury noted that it was "probably the best response to the participatory and experiential component of the required program."

The team Studio Artefact focused on interactions between the work and its audience, doing so by opting for a digital medium. This proposal consisted of the design of a giant inflatable bear that would be both a monument of appeal and intrigue. A smart phone application offered visitors the opportunity to learn about the creative process of the project and to educate them about current conditions of polar bears. Compared with the previous proposal, which encouraged impromptu meetings between users by simple and intuitive means, this project did not encourage as much exchange between users due to the use of cellular phones.

A third proposal that also explored digital interactions worried the jury. Indeed, the group Un point six un huit proposed a project consisting of a series of punctual pointers allowing to photograph and to project the eyes of the users on a large screen. The eye being, in their opinion, the key element of light therapy. The proposed interaction was between the eye projected on the screens and those of the users. Although the basic idea was original, the interactive component was not convincing since the experience for the public could prove difficult to understand.

Finally, the award-winning Prismaticaproposal by Toronto-based Raw Design proposed that the user becomes an actor in the installation by rotating colored prisms, causing distinct light and sound effects. Unlike the other proposals above, this project distinguished itself by the multi-sensory and immersive experience, permitted by the density of modular elements of colors throughout the site. This last winning proposal therefore met the main criteria, which could also help to counter the winter depression: it was convincing for the interactive nature, but even more for the immersive aspect, bringing comfort and magic to the public square.

Looking at previous editions of the series, it is noted that projects that were once rather immersive and experiential (such as the tulip field) are now increasingly focused on the interactive component and sometimes even at the expense of the first Criteria. Indeed, in the last two editions of the competition, light therapy is considered an activity in itself, no longer allowing the same freedom of appropriation. The question remains, can interactions by this luminothérapie competition heal us from the winter blues?

(translated from French by Chantal Auger)

Description
The 5th edition of LUMINOTHÉRAPIE presents this contest to bring forward and animate public spaces of the Quartier des spectacles ; it is an annual get-together for designers whom contribute to brighten Montréal winter all the while enhancing the neighbourhood image.

With LUMINOTHÉRAPIE, public space becomes an open-air museum, a field of liberties and possibilities, a multi-sensory laboratory inviting people of all ages to participate, in a festive and playful winter atmosphere. It is in this mindset that talented artists create innovative works of design that shine on both the local and international scene.

LUMINOTHÉRAPIE is about creating a world that comes alive during the day and at night time, that composes with winter. It is an invitation to live a sensory, poetic, emotional and intelectual experience that brings its share of curiosity and surprise.

LUMINOTHERAPIE is also an interactive experience which allows the implication of the public as a necessary actor and cocreator of an unprecedented experience. Luminotherapie encourages new encounters and even sometimes cooperations between individuals.

Through this contest, the Quartier des spectacles is looking for a design to implement on the place des Festivals.

The work of the designers should be diurnal and nocturnal, participative, recreational, festive, luminous and multi-sensory. It must be part of the context of winter, of the Quartier all while respecting the particularities of the site. The work must speak to the public by its from and its content through the following objectives :

-Designing a significant and meaningful work in terms of contents and artistic process, all for the site, the Quartier des Spectacles and the city of Montreal.
- establishing a participative experience that create encounters and exchanges and allows the public and the environnement to interact with the work (cooperate, modify,transform, add to, enhance, etc.) and to be a part of it at the same level as its components.
-Creating a dialog between, the work and the public to generate a real-time and unique result.
-Creating a festive, playful and bright atmosphere which by day and by night inserts itself in the winter context.