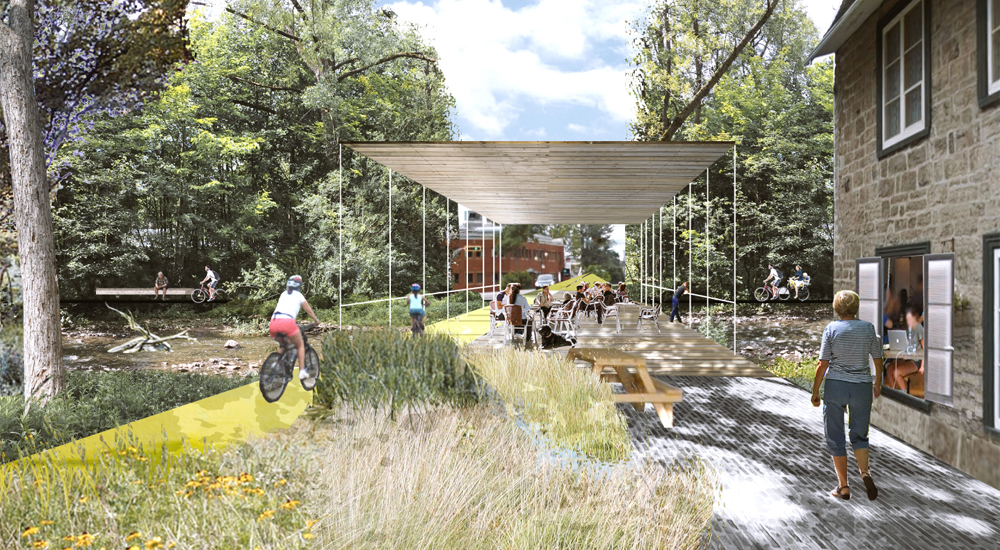 GENERAL INFORMATION ON THE COMPETITION
Editorial
“Reinventing Our Rivers” – In Quest for an Emerging Value
by Jacques White, published 2017-11-26
In the province of Quebec, most competitions are approached as a tendering procedure for the awarding of public contracts to design professionals (understood in its broadest sense), where the main objective is the implementation of an already well-defined project on a predetermined site. They come along with documents that reiterate, from one competition to another, similar conditions for the design, presentation and review of proposals, that often include elaborate sketches and even surprisingly exhaustive preliminary project plans. On the one hand, the Functional and Technical Program (FTP) establishes in advance the detailed expectations – and sometimes solutions – of the client regarding the project, in the wake of an early validation of the needs and budgets through modelling. On the other hand, a preformatted Regulation (based on the MCC, MAMOT or City of Montreal template) covers all the information relevant to the competition process, with ever more pressing contractual requirements, a direct consequence of treating contests as an alternative to tendering procedures for the awarding of public contracts.

In this portrayal that traces, out of repetition, the outlines of a virtually official competition practice at a provincial scale, the city of Quebec chose to walk a different path, going back to the very roots of international practices and, instead of advancing the process, chose to highlight a search for creativity, ingenuity and innovation, values that competitions should be encouraging. With the international competition for ideas “Reinventing Our Rivers”, the city planning leaders imagined, designed, upheld and implemented a distinct competition which did not target the materialization, in whole or in part, of a winning concept, but rather asked for a wide spectrum of visions to enrich a global discussion on the future of the four rivers that vein the vast city of Quebec. The competition then becomes a “competition on the program”, where the proposals are not considered as definitive answers to the questions raised, instead, they become an opportunity to ask those same questions differently or to ask new ones. Moreover, the focus is not on the winning proposal, but rather on all the ideas generated by the competition, like a set of new opportunities, which is what the Laboratoire d’étude de l’architecture potentielle (LEAP Laboratory) of the University of Montreal is aiming for since its creation. In fact, aren’t competitions launched to, first and foremost, generate a breadth of possibilities, instead of simply solving design problems or giving shape to a pre-defined program? By following this approach, we return to the very essence of a competition, tracing it back to its origins, but in a contemporary setting.

“Reinventing Our Rivers” was a competition for ideas held in a single stage, it was open (anonymous), multidisciplinary and international in scope. It was aimed at “landscape architects, urban designers, architects, city planners, and other environmental design professionals who can propose ambitious yet realistic concepts to guide the transformation and conservation of Québec City’s rivers, their banks, and the natural and developed areas that border them.” The contest rules are spread over merely ten pages, a fraction of the usual length. From the outset, they explicitly laid out the City’s expectations of the entrants. The City’s main incentive for organizing the competition was worded as follows: “The City of Québec will consider all proposals received, independently of prizes awarded, as a pool of development options to which existing ideas may be added to eventually create a master plan for the development of the rivers within Québec City’s borders. The master plan will then be used as a guideline for planning all public, private, and public/private projects along the rivers.” Thus, it is on the overall value of the proposals that the competition relied on, and on each of their answers to the questions raised by the City, offering a reward to laureates solely to encourage participation and to bring to light, among all the received ideas, those which deserved particular attention to offer the greatest potential to have a significant impact on the future of Quebec’s rivers, both with respect to citizen ownership and sustainability.

It should be stated that certain circumstances have played a major part in determining the type of competition and the conditions of its implementation. The City’s willingness to act swiftly, due to a pressing need to draw the competition to an end several weeks before the ineluctable municipal elections (November 5th 2017th), could not permit to envision a two-staged competition. Nevertheless, the large territorial expanse and the complexity of the issues involved would have entirely justified the above consideration, forasmuch as there is a higher number of elaborate proposals submitted in a competition involving finalists (with remuneration) than in an open and anonymous competition (without remuneration). But from a different perspective, an open competition allowed the City to meet its objective with greater ease to receive a broader selection of ideas to eventually conceive a more inspired master plan. A solution combining two different models had to be created, namely a competition for ideas with a tight schedule, but with substantially higher benefits than usual, thus allowing to cover the vast expanse of the territory (which the City refused to reduce in any way), while embracing various independent scales of intervention : territorial (with four rivers sharing one legacy), sectors of intervention (a selection of choices per river, arranged in predefined groups), and human scale (corresponding to the same sectors of intervention, to be rendered through varying perspectives of atmosphere). Each of these scales precisely coincided with one of the three required panels. To avoid dispersion, the City accepted that all areas of interest may not be covered by all contestants, limiting its requirements to a minimum of three areas for at least three of the four rivers (Cap-Rouge, Saint-Charles, Beauport and Montmorency). It was hoped – and it was borne out – that the entirety of the received proposals would cover most of the sites foreseen by the City for the establishment of future infrastructures. Furthermore, leaving a freedom of choice for the selection of the sites allowed the City to validate, or invalidate, its anticipations, which in themselves served as a useful addition to the necessary reflections.

At first glance, it appears deceptive that only 21 of the 211 initially participating teams have followed through with a final proposal. Partly, this can be explained by the unusual nature of the competition, namely a relatively short-term competition for ideas held during the summer, in a single phase, significantly more demanding than usual (international) in terms of that it required a reflection on various aspects of design while considering a great territorial expanse, and in terms of the presentation expectations (three A0 panels covering several sites). Although beyond the seemingly low response rate at first sight, it is the thoughtfulness and richness, emerging with eloquence from the 63 panels (accounting for 70sqm of ideas) that had to be reviewed by the jury, whose work was guided by a set of, precise but open, judging criteria, written as to allow the possibility for the unexpected, and even the unpredictable, to emerge.

The jury fully understood the distinctive features of the competition with respect to the City’s expectations, the proposals to be delivered, the issues that needed to be addressed and the considerable challenges that the contestants needed to face. They began by spending the entirety of their first day of deliberations to visit the sites that were most often identified by the contestants as sectors of interest, allowing to engage a collective and comprehensive reading of the state of these sectors as well as their potential. The following day of deliberations opened to a wealth of discoveries, all in perfect harmony with the particular goals of the contest, the jury having indeed spent the best of their energies to fully understand and to clearly emphasize, after much discussion, the emerging value from all of the proposals, instead of aiming exclusively at comparing them in order to find a deserving winner. Thus, it is not surprising that the jury, in their report [1], insisted on commenting on all of the received proposals, instead of focusing solely on the three laureates. And when the time came to justify the choice of the winners, it was strongly emphasized in what those three laureates are complementary and form, collectively, one and a whole, coherent proposal, like an immutable triangle of ideas, in which a segment cannot be retrieved without disrupting its entire symbiosis. The stakes and the benefits of this competition couldn’t be better presented than by Jandrik Hoekstra, president of the jury, released in a video at the very moment of the announcement of the competition results [2]. The jury, undeniably, fully understood and took charge of the mission that the City had entrusted them with. Just like the entrants, as it appears.

Without setting an overall unerring competition model, since walking on roads untraveled involves its own fair share of risks, uncertainties and hopes that will remain only partially carried out, this competition paves the way for a new set of opportunities that Quebec might be missing out on, geared less on procedures and more on shared ambitions; in other words, competitions that leave more space for the marvelous opportunities and potentialities that stem from dreaming, just like those that we allow ourselves to aspire to and that we wish to witness, one day, become reality.

Description
As part of the Plan des Rivières, the City of Quebec is launching an international ideas competition aimed at developing the main rivers that crisscross its territory, namely the rivers of Cap Rouge, Saint-Charles, Beauport and Montmorency.

Each of them is distinguished by its unique physical characteristics, history, potential and challenges, as well as shares a rich heritage as tributaries of the majestic St. Lawrence River, which borders Quebec City and forged its identity since its founding in 1608.

At a time when the municipal authorities are considering taking action to develop and sustain the rivers in Quebec, this competition comes as a pivotal event that will inspire and eventually guide the planning of a variety of projects.

The main purpose of the international ideas competition is to inspire municipal authorities to develop and implement a master plan to achieve the following objectives:
- Improve the accessibility of rivers, while preserving their quality;
- Protect and enhance sensitive natural environments;
- Exceed the recreational limits in order to enjoy the four seasons;
- Reinforce citizens' sense of ownership of rivers and their surrounding environment;
- Connect existing and future recreotouristic equipment;
- Define the development potential and urban requalification of targeted sectors of interest;
- Strengthen bonds between neighborhoods;
- Showcase culture and heritage.

The competition is open, multidisciplinary, international in scope and held in one step. It is intended for landscape architects, urban designers, architects, urban planners and other environmental design professionals ready to propose both ambitious and realistic ideas that will guide the transformation and conservation of the rivers of Quebec, their banks and areas bordering them, natural or urbanized.