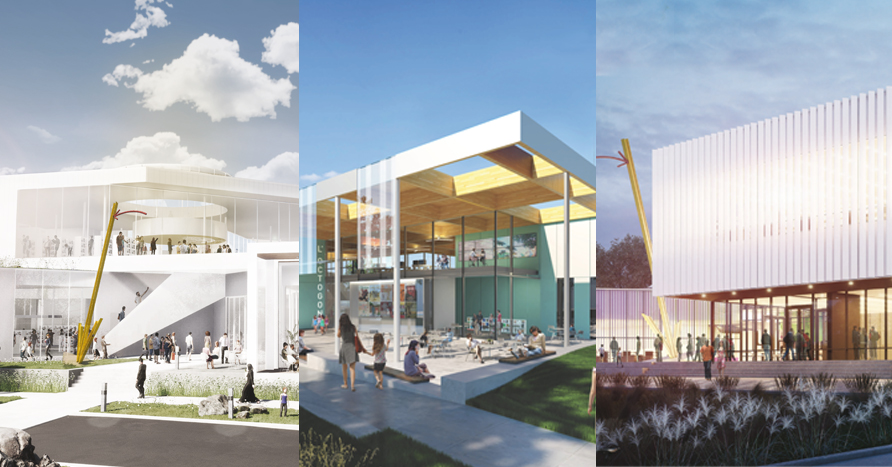 (Translated by Jade Swail)
Description
A library in the heart of the district and in the hearts of its citizens.

L'Octogone, which has been accessible for over 30 years, has proven over the years its ability to innovate and excel. The expansion and renovation project is part of this desire to remain a source of inspiration for those who use it, an irresistible attraction for those who discover it and a symbol of pride and belonging for those who live in the LaSalle community. The creation of this major project will confirm that the library is well and truly of its time with its desire to make a difference in the community as a social and cultural crossroads and a creative laboratory that supports the culture of innovation, stimulates creativity and participates in the pleasure of reading and learning.

As the engine of a complex system, the heart symbolizes the essential. It requires an organization of many elements that keep it alive. In this project, the user will become the heart of L'Octogone and will play a vital role in keeping the library alive. Not only as a user of the services but also as a producer or co-director. Putting in place the means for all citizens to benefit from a real place of connection, a meeting place for both community groups and informal groups who share the same passion must have a positive impact on society. The place will exist to read and tell stories, but also to create and live them.

Designing the new services and future spaces of the Octagon Library for the 21st century also means taking into account the hopes that science and technology are opening up, it means having confidence in the future of human development and it means affirming the deep conviction that knowledge and creativity are inexhaustible sources of pleasure and socialization.

Thus, the specific objectives pursued by the project are set out according to the following areas of excellence and development:

- Learning and understanding
- Dreaming, imagining, escaping...
- Create and participate
- Living together or in your bubble
- Playing, reading and moving
- Exploring through comic

Stage 2 : Performances
November 21, 2017: Mandatory information meeting for the Finalists
November 21 to December 18, 2017: Question and answers period
December 21, 2017: Deadline for transmitting answers to questions
January 31, 2018: Delivery of Projects
February 21, 2018: Public Hearing of the Finalists (evening)
22 February 2018: Jury's meeting
February 27, 2018: Disclosure of the Laureate
April 2018: Awarding of the contract to the Laureate by the City Council