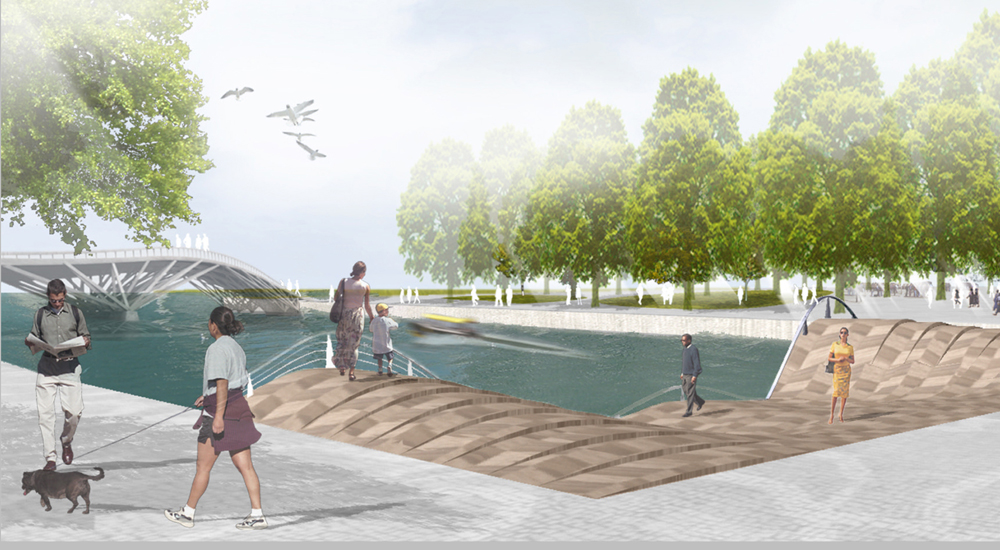 GENERAL INFORMATION ON THE COMPETITION
Description
The Government of Canada, the Province of Ontario and the City of Toronto established the Toronto Waterfront Revitalization Corporation (TWRC) in 2001 to lead and oversee the renewal of Toronto's waterfront. This 2,000 acre area extends from Ontario Place in the west to Ashbridges Bay in the east. The 20-plus kilometres of under-utilized shoreline stretch along the edge of downtown Toronto, Canada's largest city - making the revitalization of Toronto's waterfront one of the greatest urban development opportunities underway in North America.

The TWRC's vision is to put Toronto at the forefront of global cities in the 21st century by transforming the waterfront into beautiful and sustainable communities, fostering economic growth in knowledge-based, creative industries, and ultimately redefining how Toronto, Ontario, and Canada are perceived by the world. A core part of that mission includes building high-quality waterfront parks, public open spaces, cultural institutions and other amenities needed to generate vibrant urban activity.

TWRC's mandate is to design and implement the redevelopment of what are largely publicly owned lands across the waterfront. Collectively, the three governments have committed $1.5 billion for a wide range of revitalization projects. Providing continuous public access across the Central Waterfront is a key priority.

(Competition brief excerpt)
Jury comments
The final submissions will be reviewed by a six-member jury of distinguished arts and design professionals. The jury was formed by the TWRC and charged with offering their best judgment as to which of the proposals best represents the collective aspirations of the City of Toronto for its waterfront. In conducting their deliberations, the jury will have the benefit of feedback from a number of different sources, collected during the two weeks after submissions are received.

First, each of the proposals will be given a technical review by the TWRC Program Management Team. They will conduct a short feasibility exercise and deliver an order-of-magnitude cost estimate, a basic in-water engineering review, and a summary of potential environmental impacts for each proposal. The TWRC will collect these findings into a brief report that will be given to the jury for their consideration during deliberations.

Second, the City Staff Technical Advisory Team will review the proposals and prepare a report indicating what government actions may be necessary to implement the different components, and what regulatory issues might be raised. These will be presented to the jury for their consideration during deliberations.

Third, the Central Waterfront Stakeholder Committee will review the proposals and compile a report summarizing the local community's comments, and Harbourfront Centre will consider them from an operations perspective. Both of these sets of comments will be presented to the jury for their consideration during deliberations.

Lastly, through the public exhibition, a broad range of opinions will be solicited from residents, workers, and even visitors. The TWRC will collect these comments and organize them into a written record given to the jury for their consideration during deliberations.

After receiving this information, the jury will then meet to identify a recommended proposal.They will prepare a written summary of their findings to the TWRC board for adoption and approval of funding. The recommended proposal will then be brought before City Council prior to proceeding into implementation.