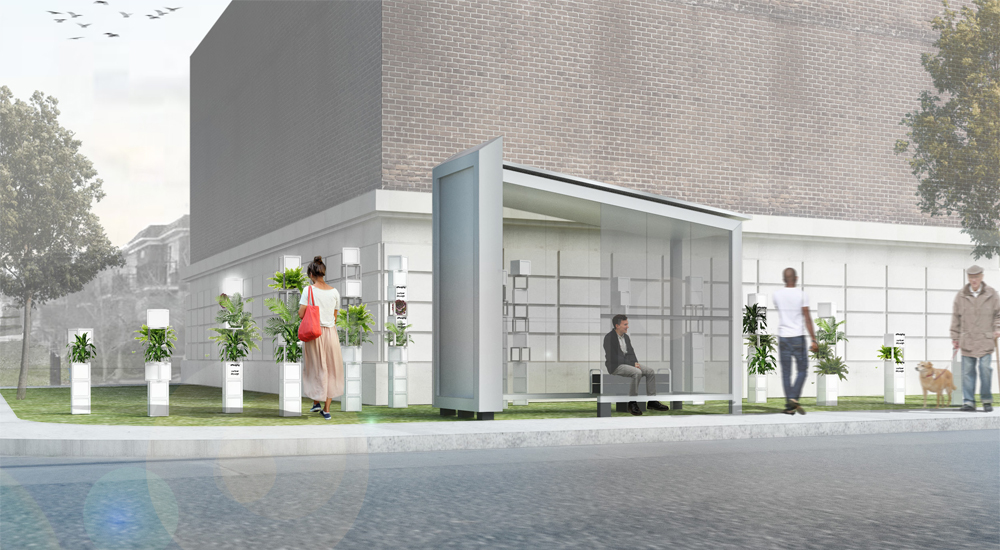 The chosen slogan, "MORE THAN WAITING FOR THE BUS" invites designers to reflect on contemporary approaches that can help invigorate these spaces in interactive, poetic, critical and meaningful ways: from solely utilitarian to more multi-purposed spaces surrounding bus stops.
Jury comments
Mr. Peter Fianu was unanimously named president of the jury, while Dr. Carmela Cucuzzella, co-organizer of the competition, was named the competition consultant for the jury, without being part of the jury deliberation. Ms. Christelle Kouotze was not able to be part of the jury deliberations, which took place on April 10th, 2017 at Concordia University.

This project proposes to constitute a luminous forest. Starting from a principle of modularity, which several competitors have chosen to adopt, given the repetitive nature of bus stop in the city, the project adds a playful and interactive dimension. The concept - highly cultural - is intended to be both educational and informative. It is of a scale that is as adaptable as it is reproducible and in so doing it responds to the possibility of its generalization. The jury considered that this proposal was an excellent complement to the generic bus shelter.

Project resolutely playful. One of the few proposals adaptable to all season. The focus given to children characterizes its underlying didactic canvas.

This proposal received a mention because of its claim for a principle of conservation, which is as simple as it is strong: to work with the existing resources and natural entities. The principle is generalizable and it especially reminds us that all pre-existing conditions of any design situation carry a potential of invention.

List of Competitors
Competition staff and jury
Calendar
February 2, 2017: Registration Opens
February 16, 2017:
Competition Launch: full brief released online
March 2, 2017: Presentation + Only Forum of Questions Event - at the Maison du développement durable (MDD)
March 17, 2017: FAQ's to be published
March 24, 2017: Registration Closes
April 7, 2017: Competition Submission Deadline at 5:00PM EST
April 10, 2017: Competition Jury Meeting
April 19, 2017: Event for the Announcement of the Winners - online and at MDD)
Press Review
List of general documents
(not accessible)
IMPORTANT NOTICE : Unless otherwise indicated, photographs of buildings and projects are from professional or institutional archives. All reproduction is prohibited unless authorized by the architects, designers, office managers, consortiums or archives centers concerned. The researchers of the Canada Research Chair in Architecture, Competitions and Mediations of Excellence are not held responsible for any omissions or inaccuracies, but appreciate all comments and pertinent information that will permit necessary modifications during future updates.
info@ccc.umontreal.ca
Production