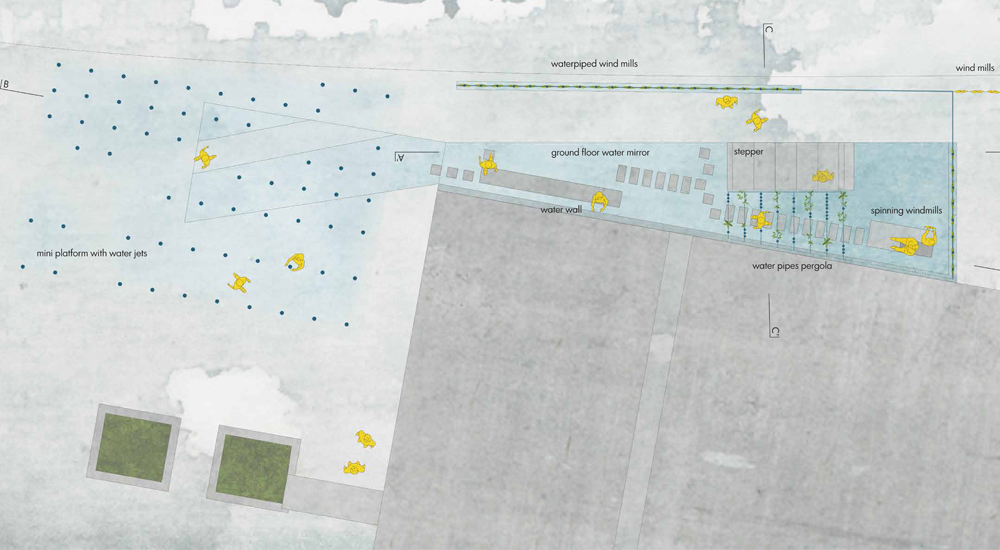 The chosen slogan, "MORE THAN WAITING FOR THE BUS" invites designers to reflect on contemporary approaches that can help invigorate these spaces in interactive, poetic, critical and meaningful ways: from solely utilitarian to more multi-purposed spaces surrounding bus stops.

For this site that received the most proposals, the deliberations of the jury were more difficult. This project has emerged as the most elegant in its design and presentation. Municipal water management is a real problem with considerable environmental implications and it is the only proposal that has chosen to integrate this issue into the bus stop. The proposal is very elaborate and presents itself as a series of systems that illustrate and implement devices for water reuse, energy production in a composition representing the water cycle. The microcosm of the bus shelter is then transformed into a true macrocosm. This project is paradoxically as minimalist as it is didactic.

A proposal that is conceivable regardless of the season. The idea of an urban terrarium, which can appear as an element of urban place-marker disconnected from its context, is nevertheless connected to the metro station in an astute way. The information exchange regarding the reduction of GHG'sthrough the use of the bus is done in a ludic manner and will therefore appeal to all ages.

The jury wished to mention this proposal, based on the excesses of public art which would be put here at the service of the modesty of bus stops. The project is audacious and frank, it is as playful - even ironic - as intriguing.

This proposition is rich in references as it makes good use of the famous territorial grid imagined by the Italian collective Superstudio in the 1970s. The presentation is very beautiful. It could be transposed to most sites, but if the components were indeed transferable, the designers did not clearly formulate what would make it an environmental commitment.

Despite its great qualities, this project has a major flaw: it is not universally accessible. The elevation marking of the site, the overflow of the bus shelter ladder is in itself a remarkable concept that would be convincing on the urban scale. Would it have been possible to imagine it on one level while maintaining verticality?

A system that relies as much on technology as on the game. The jury appreciated how the proposal takes the whole site by intervening on the interstices. The explicit and voluntary consideration of the constraints of universal access was emphasized as a remarkable approach.

List of Competitors
Competition staff and jury
Calendar
February 2, 2017: Registration Opens
February 16, 2017:
Competition Launch: full brief released online
March 2, 2017: Presentation + Only Forum of Questions Event - at the Maison du développement durable (MDD)
March 17, 2017: FAQ's to be published
March 24, 2017: Registration Closes
April 7, 2017: Competition Submission Deadline at 5:00PM EST
April 10, 2017: Competition Jury Meeting
April 19, 2017: Event for the Announcement of the Winners - online and at MDD)
Press Review
List of general documents
(not accessible)
IMPORTANT NOTICE : Unless otherwise indicated, photographs of buildings and projects are from professional or institutional archives. All reproduction is prohibited unless authorized by the architects, designers, office managers, consortiums or archives centers concerned. The researchers of the Canada Research Chair in Architecture, Competitions and Mediations of Excellence are not held responsible for any omissions or inaccuracies, but appreciate all comments and pertinent information that will permit necessary modifications during future updates.
info@ccc.umontreal.ca
Production