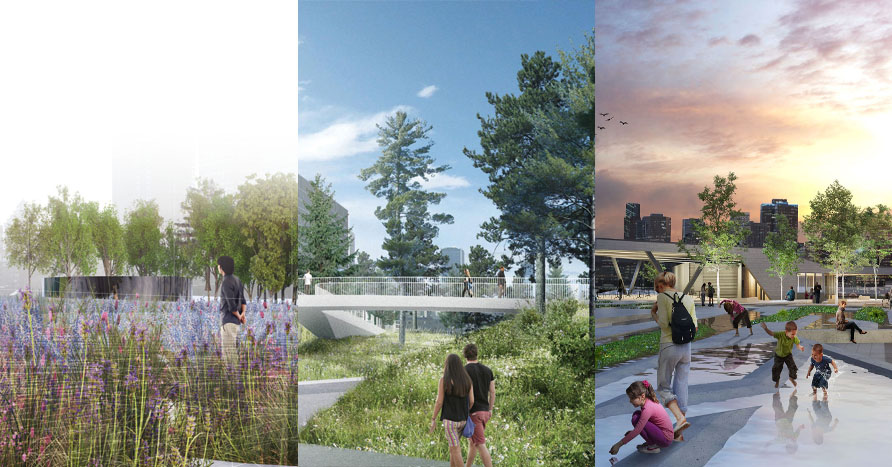 HAPA Collaborative + Groupe A Annexe U

winner
Lemay + Angela Silver + SNC-Lavalin
GENERAL INFORMATION ON THE COMPETITION
Description
The City of Montréal has identified the redevelopment of the area surrounding the Ville-Marie Expressway as a priority urban project, grouping together a series of interventions under the term "Projet Secteur Champ-de-Mars". This project aims to define an attractive, high-quality urban setting that will repair the break caused in the sector by the construction of the Ville-Marie Expressway in the 1970s.

The vision for the entire Champ-de-Mars sector is that of a crossroads between the old city and the city that has developed outside its walls. Initiated with the Quartier international de Montréal (QIM), which has restored a high-quality link between Old Montréal and the central business district, the development of this eastward crossroads aims to restore the links between the historic city and its old suburbs and to enhance a network of high-quality public spaces from Victoria Square to Viger Square.

This vision is the result of a participatory codesign process launched in 2014 and is based on numerous studies conducted by the City of Montréal in relation to the Champ-de-Mars sector. It is based on five major development principles derived from the diagnosis of the sector:
- the appropriation of the sector by users
- the quality of the urban design
- the user-friendliness of the mobility links;
- the enhancement of a rich and diversified heritage;
- the enhancement of a monumental landscape.

In response to the City's desire to redevelop the Champ-de-Mars sector, the MTMDET is currently covering a portion of the Ville-Marie Expressway to allow for the development of Place des Montréalaises, a new public square near the Champ-de-Mars metro station. This work is a legacy of the Quebec government to mark the 375th anniversary of Montreal.

In an effort to generate the most innovative and creative design ideas, the City is launching a multidisciplinary international landscape architecture competition for the permanent development of this new public square, including a pedestrian bridge leading to the Champ-de-Mars. Through the meeting of ideas, the competition will aim to produce innovative and quality solutions.

(CRC translation)
Jury comments
The Jury, whose president Mrs. Marie Pimmel was appointed by its members, was composed of eleven members.

31 proposals were received in the first stage. The Jury first proceeded by elimination and then argued to select the five finalist proposals. A preliminary jury report was sent to the finalist teams regarding their respective proposals only, to inform them of the arguments expressed by the jury in favour and against. In this report, the members of the jury wanted to remind all the finalist teams of certain points in order to better instruct them as to the priorities to be given and the issues to be mastered when developing their proposals.

For stage 2 of the competition, the criteria were the same as those for stage 1, with the addition of

At the conclusion of a rigorous and transparent process, the jury recommended that the City of Montreal mandate the Lemay + Angela Silver + SNC Lavalin + team to finalize the design, prepare the plans and plans and specifications and to monitor the construction site.