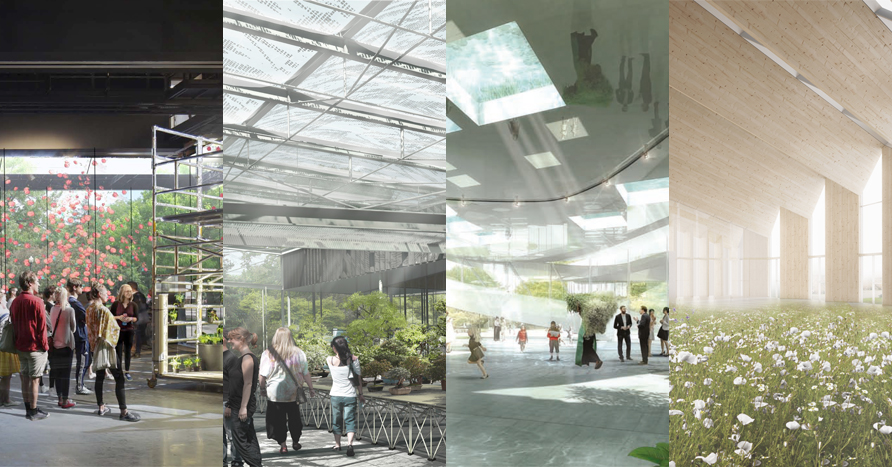 Editorial
3 successful competitions (-) 2 built (=) 1 potential Pritzker Prize
by Andy Nguyen, Jean-Pierre Chupin, published 2021-04-05
In 2014, after a long process, in 3 competitions organized in parallel by the Montreal Botanical Garden museum institution Space for Life, 3 projects were selected in coincidence with the celebrations of the 375th anniversary of Montreal. The implementation of two of them did not begin until 2018 with the temporary closure of the Biodôme, and then with that of the insectarium in 2019. The Biodome reopened to visitors in 2020 and the insectarium is scheduled to be completed in June 2021. The third was to reinvent the rose garden set in the Glass Pavilion of the Botanical Garden. The project has already been forgotten, including by the media. It is now to be regretted, as it was designed by Lacaton and Vassal, valiant winners of the Pritzker Prize in 2021.

These 3 competitions reinforced the biodiversity pole forming the largest museum complex in the natural sciences in Canada. By launching a series of international competitions, the organizers aimed to reinforce Montreal's place in a vast planetary movement in favor of biodiversity. Specifically, the goal was to update or design three museums: the metamorphosis of the Insectarium, the renewal of the Biodôme and the construction of a new glass pavilion at the Botanical Garden. The two-stage competitions called for the creation of living, evolving, permeable and ecological spaces while promoting an immersive experience for visitors. Some thirty teams composed of architects, museologists and immersive space designers from nine different countries submitted their projects to a jury chaired by French architect Édouard François. The criteria were not lacking in ambition:

In a word, Space for Life invited the design of projects with a strong identity, capable not only of attracting, but above all of increasing the number of visitors.

In the competition for the Insectarium, the proposal of the multidisciplinary team composed of the German firm Kuehn Malvezzi, the Quebec architectural firms Pelletier de Fontenay and Jodoin Lamarre Pratte, in association with the engineering firms Dupras Ledoux and NCK, was selected by the jury for its mastery of the sensibility and the museum experience, which it placed under the emblem of the metamorphosis. Seeking an innovative response to "the notion of the genetic code of the program and of the Insectarium", the consortium transformed the "biophilic" center into a scenographic circuit and arranged the creation of real experiential spaces where the insect is king. By proposing a route oriented on a break in scale and perspective, the museum offered visitors the chance to admire and have a sensory experience with insects. The winning team distinguished itself from the three other finalists (Lacaton & Vassal, Druot, FABG and SNC-Lavalin; Atelier Ville Architecture Paysage, Marc Mimram, Arup ing. and Martin Roy ing.; in Situ atelier d'architecture, Bouthillette Parizeau ing. and SDK ing.) in its relationship between architecture and nature. With the new identity architecture in glass, the Insectarium building became invisible to the benefit of nature and its interpretation. This vision of the project allowed the creation of a space where insects, nature and humans could live in symbiosis. Through an immersive sequence of landscapes underwater and underground, apnea on the surface, the Insectarium was transformed into a mnemonic body reviving the rapprochement between humans and insects. Marc Carignan, a regular contributor to the Métro newspaper at the time, concluded that "[the] simple but effective design will aim to stimulate our five senses through a metaphorical journey that will immerse us in the skin [...] of insects". With work only having begun in 2019, and the reopening of the Insectarium scheduled for the summer of 2021, it will soon be possible to judge.

The competition for the renewal of the Biodome was won by the team made up of the American/English architectural firm AZPML, and the Quebec firms KANVA and NEUF architects, and the engineering firms Bouthillette Parizeau and NCK. The winning proposal focused on total immersion within four ecosystems. By working with the shape of the large walls under the dome designed by Taillibert, the cultural complex exploited the interstitial spaces to offer a potential for renewal. With its multiple innovative and immersive interventions, the winning project distinguished itself from the 3 other finalist teams (Cloud 9, Coll. Leclerc, N.F.O.E., Pageau Morel ing. and SDK ing; Atelier Ville, MARC ARUP and Martin Roy; BNIM, L'OEUF, Architecture 49 and Dupras Ledoux). As a support for the museological path, the walls provided visitors with a diversity of points of contact with nature and wildlife. Visiting the building at its opening in 2020, journalist T'Cha Dunlevy confirmed in a Montreal Gazette article that "once inside, visitors are greeted by an organic convergence of imposing white walls that bend and tilt playfully - evoking the shapes of American artist Richard Serra's stunning steel sculptures - leading to a luminescent atrium from which one can access any of the Biodôme's five intuitively reimagined worlds”. The renewed Biodôme is no longer just a museum, but an educational center where visitors can wander freely. It took four years after the competition was launched for the rehabilitation work to begin.

Unfortunate in the case of the competition for the Insectarium, for which they had proposed a concept that was undoubtedly judged too sketchy or too minimalist - virtues that have since been amply underlined by the awarding of the Priztker Prize - the team composed of the French architectural firms Lacaton et Vassal and Frederic Druot Architecture, the Quebec firm FABG and the engineering firm SNC Lavalin was the winner of the competition for the Glass Pavilion at the Botanical Gardens. It was a compact glass box highlighting the rose garden in a daring and fragile way, which was undoubtedly risky given the winters in Montreal. Its architecture, characterized by a simple volume and a double envelope, was intended to provide a protected and clement microclimate for the precious rose collection. The "glass rose garden" became not only a poetic and decorative place, but also the object of exchanges and discussions consistent with the Botanical Garden's mission of conservation, education and research. However, even if the three other finalists (In situ atelier d'architecture, Bouthillette Parizeau ing. and SDK ing.; Saucier Perrotte, Pageau Morel ing. and Pasquin St-Jean ing.; Kuehn Malvezzi, Pelletier de Fontenay, Jodoin Lamarre Pratte, Dupras Ledoux ing. and SDK ing.) met the criteria envisioned by Espace pour la vie, the winning project stood out with a clear concept illustrating a refined and minimalist aesthetic for a place where poetry and conviviality should meet.

These 3 competitions were promising. The city was about to inherit the work of three major international architectural firms in Kuehn Malvezzi, AZPML and Lacaton & Vassal. This was without counting on political permutations. As Jeanne Corriveau mentioned in an article in Le Devoir in 2017, "In 2014, Pauline Marois' government had granted $45 million to fund three Space for Life projects, namely the expansion of the Insectarium, the redevelopment of the Biodome and the construction of a glass pavilion at the Botanical Garden. However, this funding was withdrawn by the Couillard government, forcing the City to assume the entire cost”. As a result, it was the Glass Pavilion project that was dropped, leaving the way clear for the rehabilitation of the Biodome and the Insectarium.

Since then, Lacaton & Vassal has been awarded the renowned Pritzker Prize in 2021. This prize, self-proclaimed "Nobel of architecture", has amply underlined the qualities of sobriety and economy of this French agency which advocates a sustainable architecture where responsibility does not only concern human beings, but also the planet. The organizers must certainly regret all the more bitterly the abandonment of the Roseraie, as the architecture of Lacaton and Vassal now symbolizes worldly the institution Espace pour la vie in its essential mission. There is still time to look for financing, but the bill for professional fees this time may be much higher.

The Botanical Garden's Glass Pavilion project invites its visitors to extend their visit within a bold, innovative and organic architecture in accordance to the biophilic design principles. Inspired by the greenhouses of the Botanical Garden, the exhibition building recalls the will to conceive new forms allowing for richer and more varied aesthetics.

The project will be implemented on a ground of about 1 000 m² in surface, located on the east of the Biodiversity Centre at the Botanical Garden.

The Glass Pavilion, with a multipurpose space, technologically efficient and flexible, will host, in optimal conditions, environmentally responsible, horticultural and corporate events. It will therefore answer a need in hosting in an ideal space international horticultural exhibits (orchids, bonsai, etc.). It will also serve as a significant space to host public or private events for up to 350 people for banquets, offering a terrace linked to the landscapes of the gardens.

This flexible space will offer all services and equipments necessary to holding various activities.

The outdoor space will be considered as an extension of the indoor space where the quality of the landscaping, in harmony with the rose garden, will make it a remarkable place.

This implantation favours its visibility and accessibility from the parking lot of the Botanical Garden, from the walk to the rose garden and from all the complex of greenhouses open to visitors.

The City minimally requires the LEED Platinum certification, but the «Living Building Challenge» certification is also aimed for. These are certifications that represent the highest quality standards for green buildings in order to have the Glass Pavilion be a building that benefits from the best energy-efficient technologies.

Step 2: Submissions
Question and answer period: April 7 to June 6, 2014
Submissions deposit: June 20, 2014
Audition of the finalists and jury session: July 9 to 12, 2014
Announcement of the Winners: In the weeks following the jury's selection of the winners