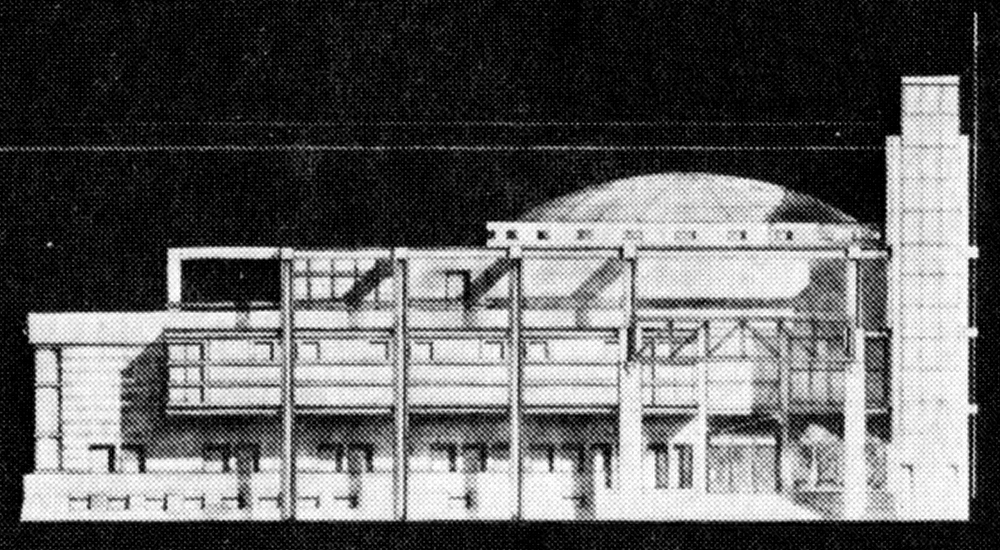 OVERVIEW
If a Carnegie library were built today, what would it be? What building type would best serve the information needs of public libraries in the 1980's and beyond? What kind of structure would best accommodate new communications technologies and still remain a cultural focus of the community? These basic questions were the essential ones for the Carnegie 1985 competition.

The competition was meant to generate new ideas and to speculate on the public library of the future. The competition was not primarily to generate "state of the art" public library design. While a design meeting current standards and addressing already identified issues was considered to be the starting point, the projects evolved into more adventuresome approaches.

Ideas were illustrated in the design proposal. Evaluation for competition purposes was primarily based on the clarity of the point of view expressed through the project submitted and the proficiency of its illustration. There was no correct solution but certainly entries that were more insightful, provocative or better presented would be marked higher than others.

Program suggestions for a public library for a community of approximately 30,000 population represented a basis for a library that could be built today. These requirements did not necessarily represent the library of the future but offered a starting point for speculation about such a library. Participants in the competition assumed these requirements unless they were illustrating libraries that implied significant changes to this general program.

Some of the concerns that all projects were to respond to included but were not limited to the following:
- Incorporating current and proposed information technology and new building processes and materials into a design for a public library;
- Determining an appropriate design that recognized the economic realities of public building especially in smaller communities;
- A design that portrayed the various roles a public library plays in a smaller community especially as the informal cultural centre of the town;
- The design of an appropriate civic building comparable to that which the Carnegie library represents in most communities. Should the public library continue though to be, as in many communities, housed in a CIVIC monument?;
- A design that recognized the Carnegie library concept and the relation of a prototypical design to the needs of an individual community. While a particular community could be the generator for a prototypical design, it was the prototypical quality of the design on which the competition focused. This did not preclude either illustrating or allowing for the important consideration that each public library be able to respond to the unique needs of its community;
- The design should be adaptable to the various environmental conditions in Ontario.

Public libraries in smaller communities often tend to be the cultural focus of the community. While the programme did not indicate how this should be interpreted, this notion along with the fact that next to the City Hall the library was likely the most prominent public building in the community, was stressed.

(Excerpt from official publication)
Jury comments
Dan Benson and Leslie Woo titled their project "Stratford Dialogue" because a) they selected a site in Straftord, Ontario, and b) their design establishes a positive tension between paired conditions: URBAN/MONUMENTAL/MECHANICAL and RURAL/RANDOM/MANUAL. It is a complex story that slowly reveals itself through a provocative set of drawings. Sited between Ontario Street and the Avon River and crossing over Erie Street, the composition might be seen as a kind of "Fragmented Classicism" which includes carefully articulated bridges and towers extending into the picturesque landscape. The primary building element is a domed, urban piece that is tight along Ontario and Erie Streets. It contains an exhibition courtyard, a "Great Hall", audio visual facilities, reading rooms, and book stacks with a mechanical retrieval system. This is the URBAN/MONUMENTAL/MECHANICAL condition, inserted in a building type that is clearly a theatre: fly tower and stages (in the round, proscenium and thrust) are transformed to accommodate the requirements of the assigned library programme.

Then, across Erie Street and connected by a bridge, one finds a second building. This one is somewhat smaller than the first one and contains an auditorium and additional reading/studying spaces. Here one finds, attached to the facade facing the river, three rocketship-like towers. These amazing "mechanical turrents" are attached to the building during the Canadian winter but roll out into the garden in the summer. Finally one can be alone, reading a book amongst the trees with the city seeming far away: strict order gives way to the second set of conditions: RURAL/RANDOM/MANUAL. Benson and Woo call this scene the "Comic Landscape". And the towers have names: The "Children's Tower", the "Non-Fiction Tower", and the "Adult Fiction Tower". They are all actors on one more Stratford stage. The library that Benson and Woo propose is, in their words, "non prototypical in form, but [...] demonstrates a prototypical approach." In their minds the Carnegie Library of the future is a theatrical, dynamic place - remembering the past but deeply rooted in the fragmentary complexity of a present time and place.

Enzo Corazza organized his Carnegie Library submission as a thin linear element stretched across the edge of his proposed site, facing out across a well defined, but pastoral landscape. His "itinearity" is created by two walls, one created of books, and the other of objects. The user of the library makes a progressive itinearity between the two, from the town street at the front edge to the undisturbed countryside at the other end.

All principal public spaces of the program are accommodated on the main level, which is accessible to the handicapped, as well as clearly oriented to members of the public arriving by car, or on foot. His meeting room is located so as to be usable independently of the Library's other facilities. A limited second floor includes a series of services and specific use areas, access to and from which is readily controlled from the central desk.

The library employs a construction vocabulary of simple steel and masonry elements which are composed in such a way as to "represent" the various services the library provides to the passer-by.

In its clarity of plan, in its simplicity of movement patterns, in the richness of its articulation and the straightforwardness of its constructional systems, the Corazza design makes a useful contribution to current thinking on library design.

Architecture is much more than the design of buildings. Historically, architects have been concerned with the symbolic order of man. Traditional libraries (ie., Renaissance or Baroque libraries) had always embodied knowledge as a finite orbis doctrinoe, both in the order of the architecture and in the iconographic program. Mr. Lander's library deals with the reality of an "open" information society in the age of apocalypse. This is a library for the best informed civilization ever, yet one marked by total absurdity in its ethical and moral values. Mr. Lander's Architecture reminds one about the number of beds in Swiss hospitals, always empty, one for every citizen awaiting nuclear war, while billions have nowhere to sleep. The hope is in the world itself, in the realization that knowledge is what man needs "then and now", to live a coherent life, and that only an embodiment of knowledge thus understood makes a library worthwhile.

Mr. Swedler's project is both a proposal for an environment that would stimulate the intellect, and a critique of the neutral buildings which the libraries of today have generally come to be. This library is no mere collection of information; it is itself a statement which speaks to our senses and postulates knowledge as a personal secret, as man's ability to understand (stand-under) himself in relation to the order of culture and the order of nature.

The building represents a faith in modern culture and communications, but mediated by the sensuous images that are only accessible to embodied perception and could never be reduced to binary codes or electronic impulses. The very mode of representation, extremely precise and yet softly rendered, speaks of this dichotomy; perhaps the dangerous, but inescapable fine line which the modern architect must tread.

Mr. Turk's project starts from a "traditionally" modern separation of the major functions of the library. These are given formal identities and then overlapped in what, metaphorically, is the place for the acquisition of knowledge. I found particularly interesting how a formal analysis based on concepts of modern art, such as the simultaneity of multi-vantage point perspectives was taken through the parti and developed in the architecture. The formal vocabulary of the building is perhaps derivative from recent European rationalist architecture, but the way in which it is manipulated results in a highly original solution.

(Excerpt from official publication)
List of Competitors
Competition staff and jury
Calendar
Press Review
Nyren, Karl, Carnegie of Tomorrow., Library Journal, 1986
Nyren, Karl, A Carnegie designed for Canada in the 1980s., Library Journal, 1985
Ontario Ministry of Citizenship and Culture, Building survey of Ontario public libraries 1980-1985, 1986
Lambert, Phyllis, Le library building, the city, the user, 1986
List of general documents
(not accessible)
IMPORTANT NOTICE : Unless otherwise indicated, photographs of buildings and projects are from professional or institutional archives. All reproduction is prohibited unless authorized by the architects, designers, office managers, consortiums or archives centers concerned. The researchers of the Canada Research Chair in Architecture, Competitions and Mediations of Excellence are not held responsible for any omissions or inaccuracies, but appreciate all comments and pertinent information that will permit necessary modifications during future updates.
info@ccc.umontreal.ca
Production