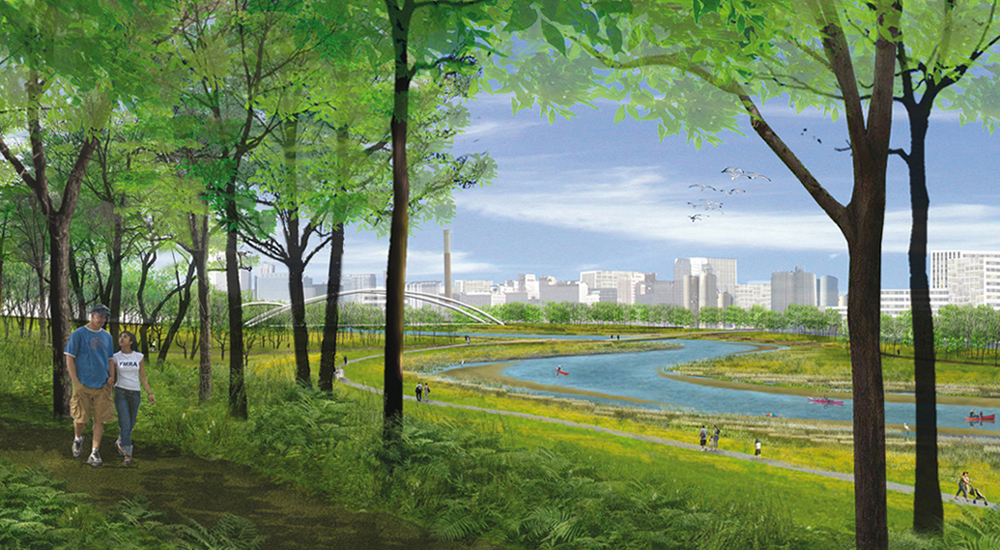 GENERAL INFORMATION ON THE COMPETITION
Editorial
From Winning Project to Public Controversy
by Carmela Cucuzzella, published 2013-04-19
Competitions are often accused of generating controversies, yet what if the projects themselves, at the urban scale, unveil vulnerability and controversies. The Lower Don Lands competition, launched in February of 2007 by the Toronto Waterfront Revitalization Corporation (TWRC), in cooperation with the Toronto and Region Conservation (TRCA) and the City of Toronto, was an international competition looking for ideas to bring the river back to the city, after many years of seeking to reframe the industrially focused site. This competition of a public space project, with the unique opportunity of harmonizing the riverbanks to the urban space, was exemplary not only for designers, but for the citizens too, as this was the realization of a longstanding community ambition.

The redevelopment of the 40-hectare Lower Don Lands, a great opportunity to rebuild a river in an urban center, called for two broad goals. The first, “An iconic identity for the Don River that accommodates crucial flood protection and habitat restoration requirements.” The main idea here was to reframe the river as a space that is striking and memorable, analogous to the Seine in Paris, or the Fens in Boston. The second general objective was, “A bold and comprehensive concept design that comprehensively integrates development, transportation infrastructure, and the river mouth into a harmonious whole.” The focus here was to ensure that a balance is achieved between the various infrastructure changes that must be implemented, such as, mass transit, new roads and trails, waterfront development projects - and the central focal point of this redevelopment, which is the river.

The winning project, the proposal by Michael Van Valkenburgh and Associates (MVVA), called Port Lands Estuary was bold and, among all finalists, it best integrated the urban and naturalized environments by creating a stunning vision for the area, through a deeply thought out implementation and phased strategy. The project by Weiss/Manfredi/du Toit Allsopp Hillier although architecturally elegant as it nicely reconciled contemporary approaches to landscape with the naturalized river mouth, was seen as less effective in the way they addressed the ecological function of the river. The proposal by Atelier Girot was considered ambitious in its integration of the morphology of the river into an urban context. However, they did not carefully consider the transportation into the site and network of movement within the urban neighbourhoods. Stross Landscape Urbanism/Brown + Storey Architects/ZAS Architects provided many innovative ideas, contributing to both, sustainable natural and urban environments, however, they did not provide an effective overall approach to the Lower Don Lands.

Since 2007, the winning project has won a variety of awards. There has been much preparation in trying to implement the project, and finally in 2010, the project was approved. However, in 2011, after the municipal election, there was an attempted takeover of the project by the new municipal administration, claiming that the current proposal was considered a ‘socialist utopia', too frivolous, and that the city couldn't afford such a plan. The new plan, endorsed by the hand-picked City Executive Committee, was that the public sector would withdraw from the plan, and would let the private sector take over. This was an obvious short-sighted, quick-fix, solution that promised instant success. So, instead of the site-sensitive winning competition project, where the community had much opportunity for involvement, the new shift promised a Mega-mall, a Ferris wheel, and a luxury hotel, among other private development plans. There would be no river park, no flooding solutions, just more development. The enormous community reaction that followed, once the initial shock turned to defense, resulted in the creation of a community network among citizens and an institutional coalition among organizations. After some tense weeks, there was a consensus vote at City Hall to take back the project from the private sector. This story has a happy ending so far, … but what happens next.

This was a case where the reflective exercise of urban planning through a competition process almost turned into a market game, if it wasn't for the community reaction. While it is debatable that competitions have the high hand on controversies, it is undeniable that they possess the inherent quality of stimulating public debate, before during, and after the competition.

The Toronto Waterfront Revitalization Corporation (TWRC) was established in 2001 by the Government of Canada, the Province of Ontario, and the City of Toronto to lead and oversee the renewal of Toronto's central waterfront. The TWRC's mission is to put Toronto at the forefront of global cities in the 21st century by transforming the waterfront into beautiful and sustainable communities, fostering economic growth in knowledge-based, creative industries, and ultimately redefining how Toronto, Ontario, and Canada are perceived by the world. In the Lower Don Lands, naturalizing the mouth of the Don River and integrating it harmoniously with new waterfront redevelopment and transportation infrastructure are key priorities for the TWRC and its partners.

The Toronto and Region Conservation (TRCA) main objectives are to restore the health of the region's rivers and waters, promote a system of natural areas, facilitate sustainable living and city building, and pursue creative partnerships for delivering its projects. With funding from the TWRC, the TRCA has engaged a consultant to undertake an Environmental Assessment (EA) of the best means to naturalize the mouth of the Don River and protect more than 230 hectares in the Lower Don Lands vicinity from flood risk.

Approximately $65 million has been earmarked for the naturalization of the Don River and reconstruction of any infrastructure directly impacted by this work. Additional phases of work may be implemented over time pending availability of additional funding.

The TWRC, in cooperation with the TRCA and the City of Toronto and other government partners, is sponsoring an Innovative Design Competition to bring a fresh, new perspective to the 40-hectare Lower Don Lands, which represent one of the greatest opportunities to rebuild a river in an urban centre. Five teams representing a range of different urban and architectural design philosophies have been selected to participate in an eight-week design competition. The fundamental purpose of this design competition is to establish a common vision for this area, which has for decades been “on the perimeter” of various waterfront planning initiatives, but never treated as a centre of revitalization in and of itself.

Given this wide range of challenges – from the general to the specific – there are two broad goals the Lower Don Lands Innovative Design Competition seeks to achieve:

Goal #1: An iconic identity for the Don River that accommodates crucial flood protection and habitat restoration requirements.
Goal #2: A bold and comprehensive concept design that integrates development, transportation infrastructure, and the river mouth into a harmonious whole.

In order to achieve the goals described above, ten elements have been identified as required components of the proposals:

The designs should propose cost-effective solutions that will have as much impact as possible. They should also be conscious of the long-term maintenance implications, as the goal is for the river to become a self-sustaining ecosystem with as little human intervention as possible.

The jury deliberations included attending the public exhibition and presentations by the four competitors held at BCE Place on April 16. A walking and bus tour of the Lower Don Lands site was conducted on April 24. The jury met for two days, April 26 and 27, to formally review the designs and to select the winning scheme and team. The staff of the TWRC provided a broad overview of the competition requirements, site context, flood control and ecological issues, as well as patterns of land ownership and soil conditions. As part of their deliberations, the jury received presentations from three stakeholder groups. The Toronto and Region Conservation Authority (TRCA) coordinated an Environmental Assessment Technical Group to provide an overview of the ecological and hydrological feasibility analysis and a high level costing for each design concept. A City of Toronto Technical Team provided a staff overview of comments received from each of the relevant City departments including urban planning and design, parks, heritage and culture, water, and municipal servicing. The City team provided the jury with their identification of the strengths and weaknesses of the designs and provided thoughts on the teams' innovative approaches.

John Wilson, Chair of the Lower Don Lands Stakeholder Committee, provided a summary of the group's response to each of the designs. The group prepared a report for the jury with detailed critiques of each design.
Kristin Jenkins of the TWRC provided the jury with a summary of the public comments collected during the BCE Place public exhibition, April 16 – 24.

In addition to reviewing the design reports submitted by each competing team, the models of the competition schemes were set up for viewing at the offices of the TWRC specifically for the jury deliberations.

The jury acknowledged the exemplary work of Claude Cormier in the design of Commissioners' Park which was completed before the idea of launching an international design competition for the mouth of the Lower Don was approved. Although Commissioner's Park is superseded by the naturalization of the mouth of the Don River, the park's recreational program was incorporated in different ways within each of the four submissions.

The jury recognized the leadership role of the TWRC in promoting design excellence and innovation through international design competitions. And, the jury commended TWRC for its deep and consistent commitment to citizen participation and on-going stakeholder consultation. Finally, the jury appreciated the input of the stakeholder groups themselves---TRCA, City of Toronto, and the Lower Don Lands Stakeholder Committee. The jury was impressed by the quality of the information that was presented and the enthusiasm and passion the stakeholders have for the Lower Don Lands.

The jury commended the outstanding and innovative work that each of the teams produced in a short period of time for such a complex undertaking. The jury was impressed by the quality and diversity of the multi-disciplinary teams which included significant participation from Toronto architects, urban designers and engineers. The jury selected the design by the team led by Michael van Valkenburgh and Associates as the winning design. This design was selected because the jury felt it best met the two major objectives of the competition which were to create a naturalized mouth and iconic identity for the Don River, and to deliver a comprehensive plan for addressing the area's ecological, urban design and transportation issues. The implementability of the MVVA team design was also an important consideration for the jury.
Jury comments
List of Competitors
Competition staff and jury
Calendar
Press Review
(2 février 2007). Waterfront Corporation officially launches international design competition for Lower Don Lands, Canada NewsWire.

(14 avril 2007). The Lower Don's rise; Where river meets lake is a forgotten bit of city. But four plans show how it could become one of T.O.'s most desirable areas, The Toronto Star.

(3 mai 2007). Why waterfront revival will fall short of brilliance, The Toronto Star.

Rochon, Lisa. (9 mai 2007). Winning design returns Don River to its rightful place in the city, The Globe and Mail.


List of general documents
(not accessible)
IMPORTANT NOTICE : Unless otherwise indicated, photographs of buildings and projects are from professional or institutional archives. All reproduction is prohibited unless authorized by the architects, designers, office managers, consortiums or archives centers concerned. The researchers of the Canada Research Chair in Architecture, Competitions and Mediations of Excellence are not held responsible for any omissions or inaccuracies, but appreciate all comments and pertinent information that will permit necessary modifications during future updates.
info@ccc.umontreal.ca
Production