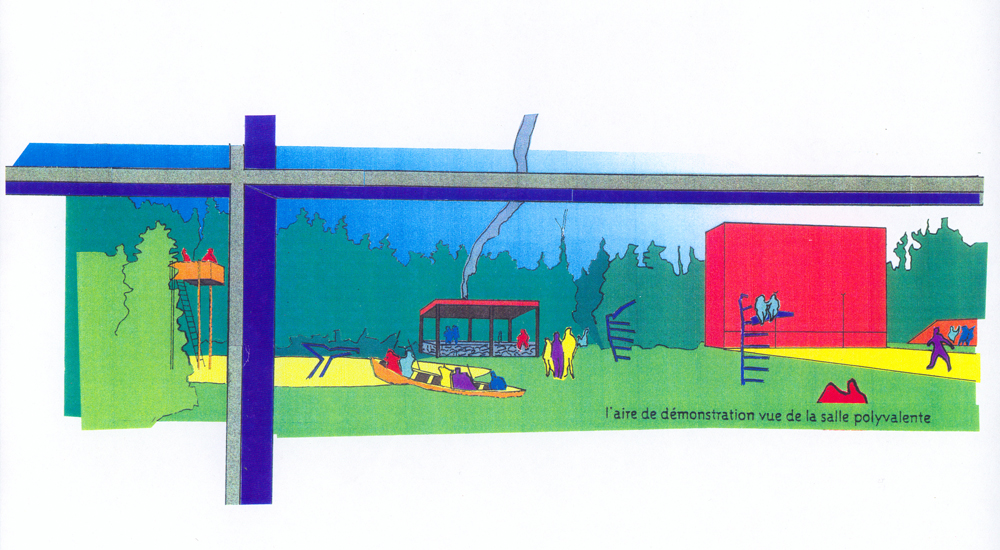 GENERAL INFORMATION ON THE COMPETITION
Description
In February of 1995, the Centre International du Loisir Culturel de la Francité et de la Francophonie (CILCFF) published a tender call in order to hold a competition aimed at providing the town of Trois-Pistoles with a thematic cultural facility linked to the activity of Basque whalers within the St-Lawrence Estuary during the 16th and 17th centuries. This project was part of an experimental approach coordinated by the Québec Ministry of Culture and Communications in collaboration with the Québec Order of Architects, which intended to award public commissions by means of architectural competitions. The historical and geographical context of the Trois-Pistoles region would serve as motive and pretext to the development of an architectural project favouring conservation, awareness and celebration of Québec cultural heritage. The competition's main objectives were; the enhancement of this faunally rich and diversified region, as well as the development and promotion of its culture, history and tourism.

This competition required the development of a cultural facility fulfilling two essential roles; that of the interpretation of Basque presence in North America, as well as genealogy and research. Through the accentuation of the natural site and the proposed facilities, the programme necessitated the conception of an interactive exhibition centre of 620m2 that would assume the roles of interpretation, research and cultural diffusion. The competitors were to present an architectural concept linked directly to these objectives and requirements while evoking the Basque theme.

In association with the Office franco-québécoise pour la jeunesse (OFQJ); this event permitted the three competitors to work on their proposals in collaboration with local architects during a week-long stay in Basque-country. Other particularities of this competition included; its exclusiveness to architects aged thirty-five and under and its construction budget not to exceed $800,000.
Jury comments
List of Competitors
Competition staff and jury
Calendar
Press Review
Articles de presse :
Le Devoir 08-07-95
Le Devoir 30-09-95

Revues spécialisées :
ARQ #86, août 1995
List of general documents
(not accessible)
IMPORTANT NOTICE : Unless otherwise indicated, photographs of buildings and projects are from professional or institutional archives. All reproduction is prohibited unless authorized by the architects, designers, office managers, consortiums or archives centers concerned. The researchers of the Canada Research Chair in Architecture, Competitions and Mediations of Excellence are not held responsible for any omissions or inaccuracies, but appreciate all comments and pertinent information that will permit necessary modifications during future updates.
info@ccc.umontreal.ca
Production