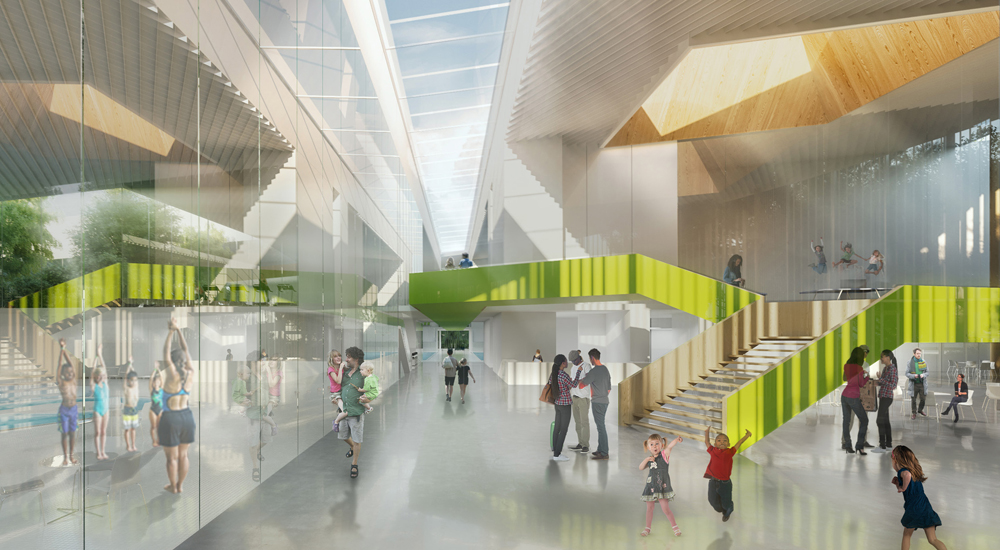 Launched in 2016, the competition for the Aquatic Complex of Laval marks a new turning point in the city’s relationship to its public architecture. Considering that Laval had not seen a single competition since 1961, this project testifies of a change in the city’s politics. With the goal of hosting the 2020 Jeux du Québec finale, Laval’s call for a sporting facility clearly demonstrates its will to make quality architecture and a healthy lifestyle accessible to both professional athletes and citizens. For the first time ever, the CCC is able to publish the video recordings of the public auditions.

The $61M project was launched by the municipality of Laval, and saw some 17 applications to the preselection and just four finalists in the design step. The selected teams were: ACDF* Architecture; Consortium Saucier + Perotte Architectes/ Neuf Architectes; Lapointe Magne et associés and the winning team Consortium NFOE / HCMA. Although far from the anonymous, international, open-to-all competition scheme, this refreshing contest is a step in the right direction to strengthen Laval’s architectural identity in the healthiest of ways. The important program will consist of three pools, bleachers for up to 1200 spectators and will have to qualify for a LEED Gold certification. One can absolutely commend the city’s care for transparency through the public hearing of the finalists’ presentations, which welcomed a few hundred citizens and professionals from the fields of water sports, architecture and urbanism and for which we will be publishing the video recordings.

Although the construction is originally due in time for the 2020 Jeux du Québec, the new infrastructure should have a lasting impact on the city well after the Games are over and will surely rival with Montreal’s Olympic Sports Centre for decades to come. The organizers have also taken the time to add, in the competition program, the need for a prospective vision of the site’s urban development in 2035. The complex’s delicate setting - a clearing in a small wooded area, alongside the highway 15 and the Cosmodome - was more or less elegantly treated by the finalists’ propositions.

ACDF*’s project consists of an undulating, supple green roof which curves and rolls up to structure the program. Covered public places and an outdoor auditorium unfold along the building’s elevation in a graceful motion. Although this strong distinctive feature was aesthetically pleasing, the jury believed the plan could have benefited from more spatial complexity. The team did not seem to handle the integration of the circulation to the landscape design as elegantly as the rest of the project, and the budget estimation for the concept (especially for the roof’s structure) is said to have put off the jury.

The project proposal by Consortium Saucier + Perotte Architectes / Neuf Architectes might have been the busiest of the four. From the highway, an oblong, opalescent building appears to simply float above the forest. In reality, the oval shape rests on top of an intricate topography linking the base of the building to the neighbouring woods. As noted by the jury, the effort here didn’t seem to be focused on the right things - no profound reflection had been made about the long-term impact of the project on the city’s development. Instead, all the energy was put into seemingly minor elements: the decidedly popular wavy roof (although more discreet than ACDF*’s) and the cloudlike translucence of the glass facade, which was questioned by the Jury member Alexandre Despatie (world-champion diver) for its inefficacy to deal with glare and direct sunlight. An overall complex design which would have benefited from a simpler approach.

Lapointe Magne et associés’s proposal brought a better response to the city’s concern for longer-term urban development. A monolithic translucent building slants up towards the highway, surrounded by an intricate network of pathways and water ponds. The team’s attention to the urban plan was felt through the creation of a bike lane, forest trails and new car accesses. Here, the building itself appeared to be the result of a thorough design process but disappointed by its lack of inventiveness and spatial experience. The strong motion of the building seemed more adapted to the scale of the highway than to that of the users. In fact, the jury observed that the main concept of having a luminous “monolith” would only be visible at night, leaving the building an underwhelming white block during the day.

The jury opted for the winning team Consortium NFOE / HCMA’s proposal. The laureate’s project is a simple, perfectly circular building which allows a distinctive configuration of the pools and appeared to be the most sensible and spacious proposal of the four. The complex becomes a clearing, hidden amongst the forest, inviting the greenery to flourish in its core – an aspect that the public seemed to applaud, since green spaces in Laval are becoming increasingly sparse. Structured by two perpendicular axes, the program condenses service spaces to use them as a separation between the recreational pool and the Olympic and diving pools. Although the building is discrete in its location, the jury particularly appreciated the reconciliation of both urban and human scales in the project, through the detailing of the facade, the public plaza and the strength of the form. This design is an appealing and promising one, which will hopefully become iconic to the city.

Demonstrating a more transparent approach to the city’s public investments, the public audition of the final presentations was very well received. This open event undoubtedly appeased some of the citizen’s concerns for the evolution of their city’s infrastructure. Despite not being a public consultation, nor a public dialogue, a public audition will surely spark the architectural conversation and introduce a more democratic design process.

Will Laval’s Aquatic Complex live up to everyone’s expectations? One could at least state that this competition and its outcome are a first step in the right direction, and everything now rests on the city’s sportsmanship in the management of the whole project. This complex having the potential of leading the way for a series of quality Lavallois competitions, let us hope everyone else decides to dive right in!
Description
The project responds to one of the issues identified in the analysis of the state of sports and recreation, being an under-investment in community infrastructure. Indeed, according to data collected in 2015, it is regretted that, despite the many existing community infrastructures, their number remains insufficient and their condition is outdated. The Aquatic Center project has been identified as a promising project and is part of the implementation of the Citys "Laval 2035" strategic vision of Laval.

The City wishes to acquire quality aquatic sports equipment that promotes healthy lifestyles through the promotion of physical activity, the development of high-level athletes and the hosting of events of national and international reach.This new contemporary complex aims to be a beneficial socio-economic engine for the population as a whole and a sensible and reflective investment in a new urban infrastructure. The concretization of the aquatic complex must also affirm the notoriety of Laval as a great city and as a forerunner in the aquatic area as well as showcasing the successes of the Laval athletes.

For the citizen, the City aims, through the realization of this sporting equipment, to:

- Provide access to facilities for the development of Laval athletes for the various competitive sports organizations.

- Provide the municipality with an aquatic infrastructure with a quality recreational pool that meets current standards and innovations.

- Provide Laval residents and families with access to a swimming pool at all times.

- Promote healthy lifestyles with Laval families, all directly related to the physical activity policy presented by the municipality in the summer of 2012.

- Reinforce the feeling of belonging and pride of Laval's citizens.

- At the strategic level, this project will increase the visibility of the City and position it at the present time by proposing a dynamic and concrete vision of its evolution.

The jury freely exchanges information on benefits and notes the following points:

- The four presentations propose solutions resembling the volumetric plan through the program and the organization of the basins desired. What strikes the jury is the greatness of the architectural gestures versus the communal vocation; The City's desire for signage has pushed designers towards the grandiose and spectacular view of the highway, while the view from the highway is questionable because of the trees and the speed of the cars.
- The jury agrees to relativize the notion of icon to the benefit of the experience of the users and to prioritize the efficiency of the internal operation.

- September 30, 2016, Individual Mandatory Information Meeting for Finalists
- September 30 - November 10, 2016, Question Period
- October 7 - November 11, 2016, Response period
- November 16, 2016, Limit on the transmission of addenda
- November 29, 2016, Deposit of the Services
- November 29 - December 9, 2016, Benefit Analysis - Technical Committee
- December 14-15, 2016, Public Hearing of the Finalists and the Jury
- December 15, 2016, Selection of the Laureate
- December 15, 2016, Approval of the selection of the Laureate by the City Council
- December 16, 2016, Public announcement of the Laureate and on SEAO
Press Review
Francis Labbé, Un complexe aquatique de 61 millions $ pour Laval, ici.radio-canada.ca, 2016, ici.radio-canada.ca
List of general documents
(not accessible)
VIDEO DOCUMENTS
play_circle_outline
IMPORTANT NOTICE : Unless otherwise indicated, photographs of buildings and projects are from professional or institutional archives. All reproduction is prohibited unless authorized by the architects, designers, office managers, consortiums or archives centers concerned. The researchers of the Canada Research Chair in Architecture, Competitions and Mediations of Excellence are not held responsible for any omissions or inaccuracies, but appreciate all comments and pertinent information that will permit necessary modifications during future updates.
info@ccc.umontreal.ca
Production