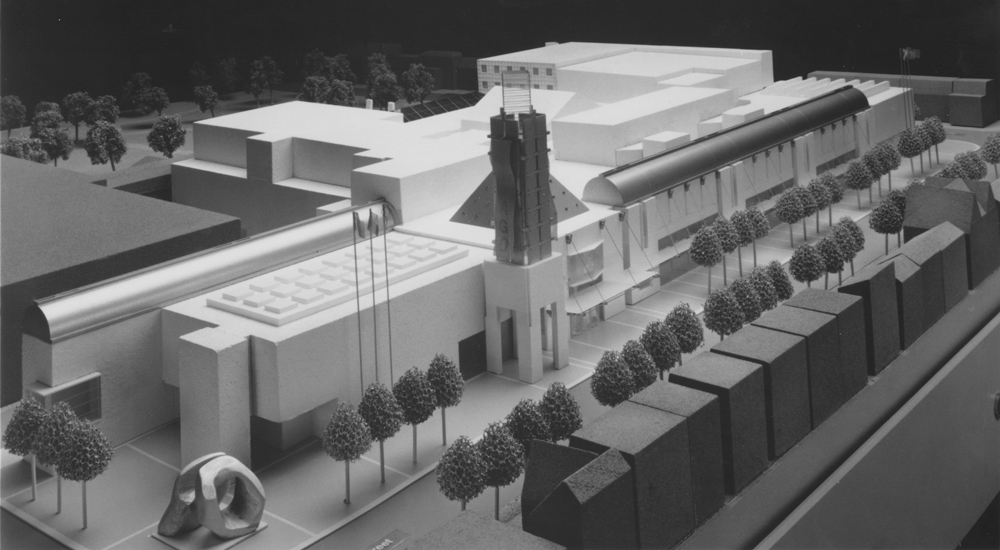 GENERAL INFORMATION ON THE COMPETITION
Description
In 1966, in response to the needs of a changing community, the Board of Trustees of the Art Gallery of Toronto and the Government of Ontario cooperated to give the gallery a new mandate. The new Art Gallery of Ontario embarked on a major 3-stage expansion program to become a first rate visual arts museum for the people of Ontario. The completion of Stages 1 and 2 in 1977, established the AGO as a world-class art institution. The public has come to expect quality programming from the AGO. In order to continue an exceptional schedule of exhibitions and public programs, the gallery must proceed with Stage 3.


This competition for the design of Stage 3 establishes a public forum for the development of an exciting new public facility. The winning entry must respond to the fixed goals and constraints [...] just as important, the successful scheme must embody the spiritual goals of the Art Gallery of Ontario.

Stage 3 must respond to a diverse set of values. It must benefit the art community, the viewing public, the neighbourhood and the people who work in the gallery.


For the art community, Stage 3 must constitute a vital, international centre for the visual arts. It must also provide an informal meeting place for artists, critics and professionals.


For the viewing public, Stage 3 must make the gallery a more inviting place to visit' the gallery will become more enjoyable, more convenient, entertaining.


For the neighbourhood, Stage 3 must create a dramatic change to the gallery's presence. The gallery will have a new exterior appearance which makes the neighbours proud.


For the gallery's staff and volunteers, Stage 3 will provide a new working environment. It must be a comfortable, convenient and effective workplace. It must evoke their pride and commitment.


Ultimately, Stage 3 will make the gallery a familiar and approachable place for all its constituents. The winning design must respond to the expectations of the community as well as to the requirements and constraints of the program.

(Extract from the design competition guideline)

Jury comments
Statement by the jury

The jury has unanimously selected an architect, Barton Myers, whose attitudes, priorities, and sensitivities it has enthusiastically endorsed. The design strategies to complete the Third and Final Stage of the Art Gallery of Ontario expansion are strong. They address the major elements of entrance, street, park, and galleries. The new entrance is created as a distinct, new, and powerful space. A strongly defined northem boulevard is developed along Dundas, incorporating Gallery shops, weatherprotective canopies, and a rhythm of trees on both sides of the street.

The new elevations respond in scale and articulation to the existing Victorian architecture. The southwest addition bordering Grange Park integrates the existing historical buildings into a harmonious, welldefmed
garden facade. The galleries are now coherently connected on two levels in a carefully considered sequence of rooms.

The Art Gallery of Ontario has evolved over time and constitutes an assemblage of pieces. As such one of the main challenges of the last phase of building is to give the museum legibility and a cohesive character. In creating a new architectural expression, the Stage Three extensions have respected the integrity of the earlier Gallery buildings.

This scheme was heavily influenced by the courageous decision to not create a sculpture court behind The Grange, since this would destroy the building's historical integrity. The sculpture galleries, by being located at grade on Dundas Street, pu shed the retail to sub-grade or basement space. It is questionable whether these galleries would add sufficiently to the life of the street and whether the retail would be successful,
which would have serious economic repercussions within the Gallery. The looped second-floor gallery circulation route is achieved by a questionable connection bridge through the existing vaulted Walker Court colonnade. The tall, but narrow curving skylit space visually connects a number of levels and spaces in an interesting manner. The Grange Park facade creates a series of masses scaled to the existing buildings, although it is hard to comprehend the reason for the use of green slate. The northern Dundas Street facade has good rhythm, scale, and entrance defmition, but the steps leading to the sculpture gallery windows are questionable. The concept depends on an inordinate amount of renovation work over
and above the program requirements.

This scheme is closely modelled on the layout of the original program and planning schematic for the Gallery. The strongly defined circulation lines which run counter to the existing axis of the buildings compromise several of the existing galleries. The creation of a 'Meieresque' addition in the Park appears to overwhelm The Grange and cuts off views from Beverley Street. It was felt that the overall image of the building was disjointed and appeared to delight in covering up as much of the existing building as possible, with a great range of materials and architectural styles. The interventions to the Moore Gallery appear to destroy one of the most successful parts of the present Gallery. The Dundas Street facade and entry sequence is awkward and unconvincing. The two-storey entrance porch eliminates a second-floor gallery on the northern facade of the building. The new vaulted gallery space indicates a curious series of triangular
skylights which would seem to present sorne serious interior Iight control problems. Inside the glazed vault over the sculpture court, a second-floor connecting bridge is treated as a punctured wall and is set directly against the rear ofthe existing Grange Rouse.

This scheme is organized on a strong looped gallery circulation scheme and the idea of north/south pedestrian walkways, at several levels cutting through the building connecting Dundas Street to Grange Park. These routes allow pedestrians to visually look into the Gallery without crossing the security line. The real issue is if these routes are true 'desire' lines and if they would be sufficiently used.

The exterior facades of the building on Dundas and Beverley Streets are transparent with large areas of glass and a series of granite-based display cases. It was strongly questioned ifthese cases would be used as
intended, that is, to display art works to pedestrians in the street. The Dundas Street extension has a two-storey cross section which reduces the width (and use) of the galleries on the second floor. The galleries
are further punctuated by a series of openings to allow gallery users views to Dundas Street. It was felt that this seriously compromised the use and flexibility of the galleries' wall space for displaying art. The two-storey north/south 'pedestriari street means that the Zacks Galleries must be extended eastward over the truck service are a in order to maintain the same gallery area. The looped circulation route is strong, but it was questioned if the bridge through the centre of the sculpture court would compromise the use of this gallery. The notion of exposing the central older gallery as an archeological artefact was interesting. The opening up and reuse of many of the existing skylights would certainly be interesting in the Old Masters galleries, but would need to be investigated as to cost and energy demands. The Grange Park facade is not entirely successful in relation to The Grange and Ontario College of Art buildings.

1986 September 25 - October 6 : Analysis of prequalification documents and preparation of short list of 12 architects to be interviewed by Selection Committee

(Competition brief excerpt)
Press Review
Art Gallery of Ontario, Stage Three : architectural proposals by competition finalists, 1987
Larry Richards, The Art Gallery of Ontario Design Competition, The Canadian Architect, 1987
List of general documents
(not accessible)
IMPORTANT NOTICE : Unless otherwise indicated, photographs of buildings and projects are from professional or institutional archives. All reproduction is prohibited unless authorized by the architects, designers, office managers, consortiums or archives centers concerned. The researchers of the Canada Research Chair in Architecture, Competitions and Mediations of Excellence are not held responsible for any omissions or inaccuracies, but appreciate all comments and pertinent information that will permit necessary modifications during future updates.
info@ccc.umontreal.ca
Production