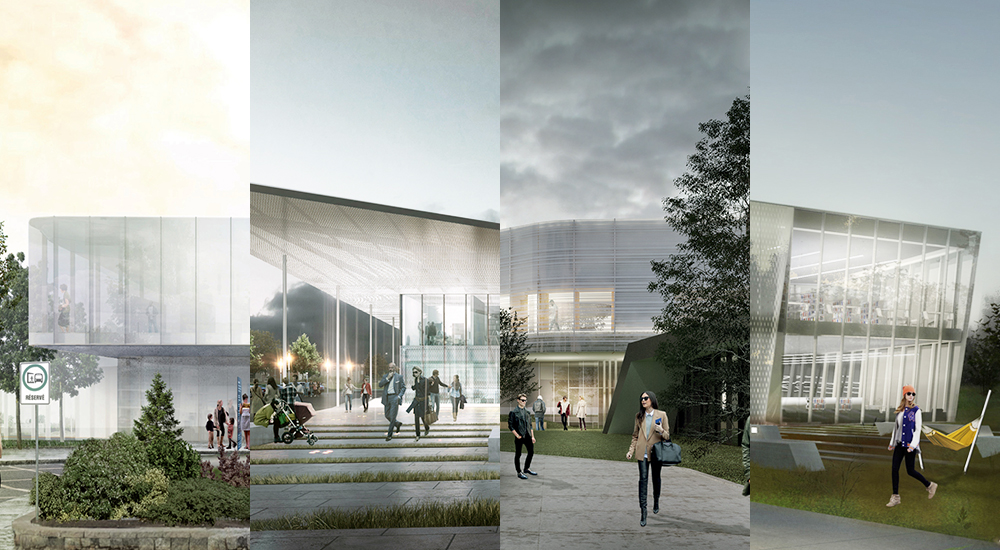 GENERAL INFORMATION ON THE COMPETITION
Editorial
If you please, draw me a third place...
by Aurélien Catros, published 2018-11-07
To note the recurrence of this expectation in competition programs for public buildings, it is time to open the debate. In 2014, the team Chevalier Morales and DMA architects won the jury over after arguing the search for a unique, iconic, and emblematic architecture, but especially the search for a "third place". Through this equivocal concept, the Drummondville library competition questions the need for a new definition of the contemporary library itself.

Created in 1989 by Ray Oldenburg, the term "third place" refers to spaces that differ from housing or workplace and fosters important social and civic roles. They are characterized by several points, some of which seem just as much of a contradiction to the very essence of a library - the storage and reading of books - as to the ambitions that fed the jury of the competition in Drummondville - a signal-architecture likely to become the symbol of the city that welcomes it. Indeed, according to Oldenburg, the third places would be spaces treated with sobriety and simplicity, especially inside, in which the conversation would be the main activity. We now understand the difficulty the 4 finalist teams faced when presented with perfectly antinomic objectives.

A $ 15.5M envelope was planned to allow the institution to settle on a site located between the train station and the Drummondville Town Hall, connected by a narrow strip to one of the main shopping streets of the city. The program prescribed a "21st century" library which would live alongside the Drummond History Society and the Arts, Culture and Immigration Department within the future building. Defined as a catalyst for the cultural and socioeconomic development of the city, this "third place" was supposed to facilitate the "convergence of the Drummondvillois".

To address this issue of urban convergence, the team Menkes Shooker Dagenais Letourneux architects proposed a multipurpose public square called the "unifying plate" on which the building would sit as "a pavilion in the heart of a civic pole". In doing so, the library is conceived as an intimate and peaceful setting, a place of reflection and contemplation. The architects mention the famous "third place" but they relate it to the empathy that the building would generate among its users through the creation of a project resolutely focused on the introspection of individuals. By imagining a collection of spaces dedicated to reading (each with its own atmosphere), the team defends a rather classic vision of the library consistent with the sobriety of the proposal that the jury will describe as "conventional", regretting the lack of a distinctive architectural gesture.

On the other hand, the project of Atelier TAG and Jodoin Lamarre Pratte architects was able to conquer the jury thanks to its "superb" entrance and the "remarkable" screenprinted concrete of its forecourt. Although certain reservations were expressed regarding the weather resistance of the veil which brings together the different elements of the program onto the roof, it has nonetheless been described as "spectacular". These numerous superlatives betray the search for an object, a symbolic architecture on the part of the jury members in the different projects. Despite this formal enthusiasm and the remarkable qualities of its internal organization, the project appeared confused in its choices of urban settlement. This aspect, without being explicitly mentioned in the program issued to the candidates, was carefully considered in each of the proposals.

Lemay + LAB's proposal stood out on the urban plan by using the narrow strip to offer an entrance to the building via the shopping street. Hailed by the jury, this bold layout required a lengthy linear deployment of the building resulting in a number of internal complications which ultimately harmed the project. Moreover, the volume of glass overlooking the site was appreciated for its architectural treatment, even if its distance from the traffic routes has disappointed a jury that would have liked to combine its qualities of a signal-signal with the presence of the entrance on the street in order to make the building an urban landmark in Drummondville. Another particularity was the increased attention paid to the locality of the project through the desire to integrate the community and the explicit references to the former textile industries of the region.

The winning team, Chevalier Morales and DMA was also praised for the many references to the history of the city both through the resolutely industrial materiality of the envelope, and the urban, environmental and landscape approach which pays homage to the "jardin des voltigeurs". In addition to the staging of the institution from the urban scale to the interior of the building, it's thanks to an original response to the concept of "third place" that won them the competition. Outside, the urban strategy is based on a network of "civic places", which can expand as the city acquires property, and which connects the site to its context, including the main street. A remarkable architectural expression makes the project "iconic" in the words of the jury by reaffirming its specific character in Drummondville. Inside, the concept is formalized by a monumental staircase / café, the nerve center of the "third place" as defined by Oldenburg. Although this architectural object poses several problems of circulation and functionality of the place (as a library), its distinctive sculptural character still underlined the emblematic trait visibly sought after by the jury who defended the project against certain reservations expressed by the technical committee.

In 2018, the public library seems to have become the symbolic program of the "third place" despite the obvious contradiction between conversing and reading at the same time. Solving this paradox implies considering the new mission of libraries at the turn of the 1980s namely: the storage and lending of audiovisual and digital content whose on-site consultation is difficult or impossible. From then on, it will be understood that the library will gradually give up its classic role as a temple of knowledge, peaceful and conducive to study, to get closer to an etymological role that it has never only had: "biblio- thḗkē", ("place of deposit for books": a place where we just borrow documents, whether they support digital data or not). This new library or "media library" can then admit several other programs including that of the famous "third place" which preserves and enriches the political and symbolic function that has always characterized this kind of building since the great ancient libraries, allegory of the power of the cities that built them. From a simple deposit, the library would be destined to become the forum of the contemporary city.

The Drummondville competition shows us once again that this typological mutation can now make the library the urban banner of a cultural and institutional commitment, as well as a "third place" of public convergence. However, this concept remains ambiguous. In the eponymous work of Antoine de Saint Exupéry (1947), the Little Prince asks three times for "the aviator" to draw a sheep before being satisfied by the design of a box with holes that lets him imagine what he wants. The "third place" is a conceptual box of the same kind that conceals the specific expectations of the promoters to architects who must yet blindly propose a project that conforms to it. The architecture must reveal the concept, thus lifting the box.

Description
The needs of the Drummondvillois were recognized and it is in 2016 that they will finally see their new library. The City of Drummondville, has undertaken for several years various studies leading to the preparation of the construction of a new library on its territory. With the obtention of the grant announced by the Ministry of Culture and of Communications last February, this major project is now taking a turn determining towards its realization.

This architectural competition represents one of the most important phases in the the planning of this municipal building. It follows the completion of several studies including a detailed program of needs, the establishment of objectives, a estimation of project costs as well as studies on the site itself. All of these data are presented in the competition documents.

By holding this contest, the Promoter wishes to benefit from the creativity of the Quebec's architects to develop a concept that meets its expectations, be: a third place energizing this sector of the city, a library of the 21st century accessible and geared to new technologies, a high-quality building that will become a point of convergence for all Drummondville residents. Services that will be offered will support economic, cultural and social development. The concepts presented will support this role of the new municipal library.

Thus, the Candidate, at the first stage of the competition, will have to demonstrate his ability to understand the issues and express them through original conceptual approaches. Applicant's experience specifically in library making will not be necessarily an asset in the evaluation of the Candidature Files. The candidates will have to convince the members of the Jury that the designer has the required qualifications to meet the challenge and that their conceptual approach meets the objectives of the Promoter.

The project is located on Lindsay Street between Des Forges Street and the railway line. This site will also host an ice rink and its service building. Works of decontamination of the site are already complete. The projected area of the new building is 4,885 square meters. Of this area, the library will occupy 4,048 meters Square, while the Drummond History Society and the Arts, Culture and immigration will occupy 667 square meters. The remaining 170 square meters will be dedicated the development of a café and a terrace.

The design and construction of the building will need to achieve LEED certification of basic or higher level while respecting the budgetary objective.

The construction budget is $ 15,500,000 before taxes. The Promoter as well as its financial partner, the MCC, attach great importance to the respect of this budget. In this regard, all Applicants will have to demonstrate their ability to meet this requirement.