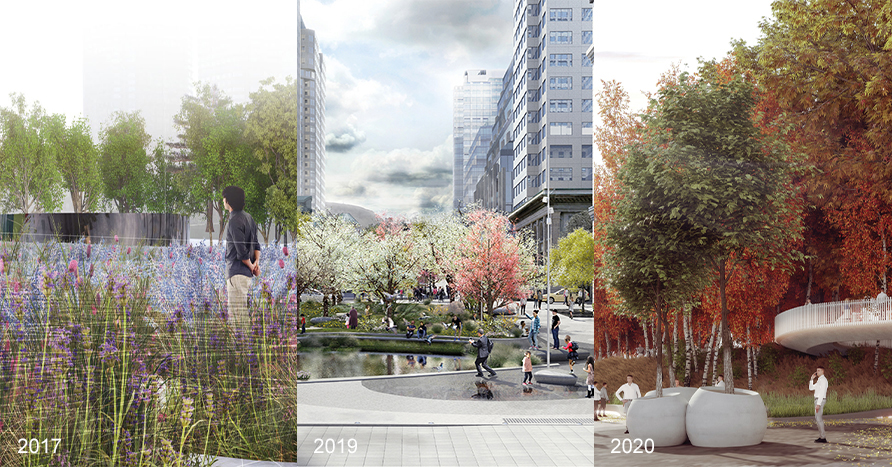 In this update of the Canadian Competitions Catalogue, we present three competitions organized by the City of Montreal from 2017 to 2020 on urban sites considered strategic. Comparisons will reveal three very different ways of designing a "public square." The competition for the Place des Montréalaises in 2017 aimed to link the Champ-de-Mars metro station to Old Montreal in order to create a new landscaped entrance. Here, the square is suspended over the highway. The international competition McGill College, l'avenue réinventée in 2019, focused on a major axis between the eponymous University or Place Ville-Marie, depending on whether one favors the academic or financial dimension of this neuralgic artery. Here, it is the street (or the widened sidewalk) that was to become a square as a result of pedestrianization. As for the competition for the development of “lot 066” and its surroundings in 2020 - whose name is not very evocative, but whose political stakes are indisputable - it in fact concerned one of the most coveted lots in the heart of the Quartier des spectacles. We could also add to it a 2003 competition, already documented in the CCC, on the same site, but which was then entitled "Place Eugène-Lapierre." Having had the honor of acting as president of the jury at the time, I suggest that readers compare the proposals and issues to appreciate the mutation of ideas and urban values nearly two decades later. It must be said that, in the meantime, Montreal's most important and international public space has undergone a true renaissance: Place des Arts.
IMPORTANT NOTICE : Unless otherwise indicated, photographs of buildings and projects are from professional or institutional archives. All reproduction is prohibited unless authorized by the architects, designers, office managers, consortiums or archives centers concerned. The researchers of the Canada Research Chair in Architecture, Competitions and Mediations of Excellence are not held responsible for any omissions or inaccuracies, but appreciate all comments and pertinent information that will permit necessary modifications during future updates.
info@ccc.umontreal.ca
Production